Neo Armenia is a tour operator and Destination Management company born and grown from the love and passion of Armenian millennial culture and profoundly beautiful nature with its founder’s 14 year experience in the tourism industry.

Today they are one of the leading tour operators of Armenian tourism new generation with a set of novel and exclusive signature tour products. Thy create and offer boutique tour experiences for their guests exploring Armenia, including new and undiscovered features. Their goal is to touch both – soul and mind – so that even a short break tour turns into a one-in-a-lifetime extraordinary journey.

The team at Neo Armenia combines modern comfort with the authenticity of their country to provide a unique, exciting, unforgettable and which is very important an “Armenian” experience․

• Take a boat trip on lake Sevan – the second highest and largest alpine freshwater lake in the world.

• Sleep like the locals in the wooden barrel houses or in an eco-friendly glamping camp.

• Travel in time and hop in a soviet taxi to explore the soviet relicts of the country.

• Explore Yerevan by a helicopter or in a hot air balloon.

Unexpectedly amazing land of Armenia – here is the most common definition by the tourists when describing Armenia. Armenia is a sovereign state in the South Caucasus region of Eurasia and borders by Turkey, Georgia, Azerbaijan and Iran. It’s located at the crossroads between Europe and Asia and is a country of mountainous terrain centered on the Mt. Ararat Valley-the heart and the symbol of the Armenian nation since biblical times.

Many different cultures and nations have been referring to the Armenian Highlands as the Holy Land because Noah’s ark came to rest on the Ararat mountain. It was mostly defined also “Mountainous Island” or the “Rooftop of Asia Minor” as the average altitude of the country is at about 1800 MSL. In the 1st century BC the Kingdom of Armenia reached its height enlarging its territory to about 300 000 km2 stretched from the Caspian Sea to the Black and Mediterranean Seas, but today it’s a landlocked country with no navigable waterways.

Even without sea access Armenia’s landscapes offer boundless beauty. In only 29,743 km2 (about the size of Belgium) all 7 main landscape types are represented and the landscapes are changed every 30 km: white and high mountain peaks, fertile green valleys, picturesque rock sculptures, rapid rivers, waterfalls, canyons, mineral springs and the fascinating lake Sevan which is the second highest and largest alpine freshwater lake in the world. It’s nice to travel to Armenia in each season because it has 4 seasons well distinguished from each other: snow-white winter, mellow autumn, colorful spring and sunny summer with a huge variety of fruits of which apricot and pomegranate as a symbol of Armenia from ancient times.

Being an ancient cradle of civilization Armenia today appears to the travellers by its Christian aspect as the 1st Christian state in the world. The enormous Christian heritage with a set of UNESCO sites is well combined with the pre-Christian civilization traces on all over the country, with variable landscapes, delicious Armenian cuisine, that would satisfy the tastes even of the most rigorous gourmets, ancient traditions and customs with a strong family institution that managed to preserve Armenian culture, identity, traditions and belonging for centuries, and of course with its very hospitable people defined by tourists as a highlight of the country.

Armenia, indeed, is a country of contrasts. Here the past and the present live very close to each other. You will feel that even in Yerevan which was founded in 782 BC (29 years older than the city of Rome) but today appears to the travelers with nice and modern charm with a large number of museums, art galleries and libraries. Being among the safest cities in the world, Yerevan has an extensive nightlife scene with a variety of night clubs, live venues, pedestrian zones, street cafes, jazz cafes, tea houses, casinos, pubs, karaoke clubs and restaurants.

Yerevan – The city older then Rome. It’s the capital and largest city of Armenia and one of the world’s oldest continuously inhabited cities. It’s 2800+ years old city which historical center dates back to the 8th century BC. Today, Yerevan is also a modern charming city with interesting cultural life, beautiful green parks and numerous fancy restaurants. 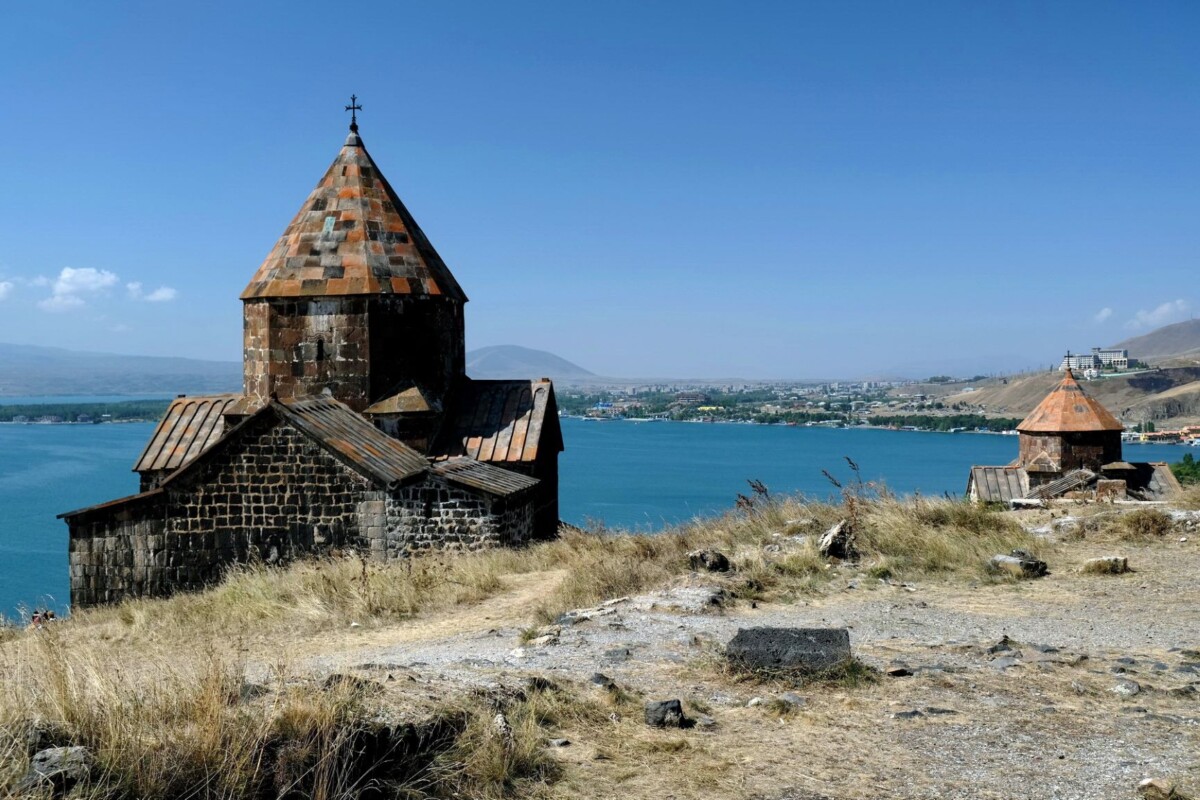 Lake Sevan – The emerald of Armenia and the second largest freshwater high-altitude (alpine) lake of the world. Its sole major island (now a peninsula) host a medieval monastery and offers a breathtaking panoramic view to the blue waters of the lake. This huge freshwater basin is home for endemic Sevan trout (Salmo ischchan) which is delicious especially grilled with vegetables.

Tsagkhadzor – 50 kilometers north of the capital Yerevan, surrounded with alpine meadows, this spa town is situated on the slope of Mount Teghenis, at a height of 1841 MSL and is a perfect place for ski lovers and for winter holidays. Here the skiing season normally starts in mid-December and stretches well into March with the top slopes often fit for skiing in April. 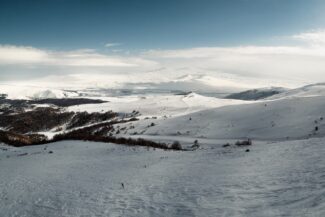 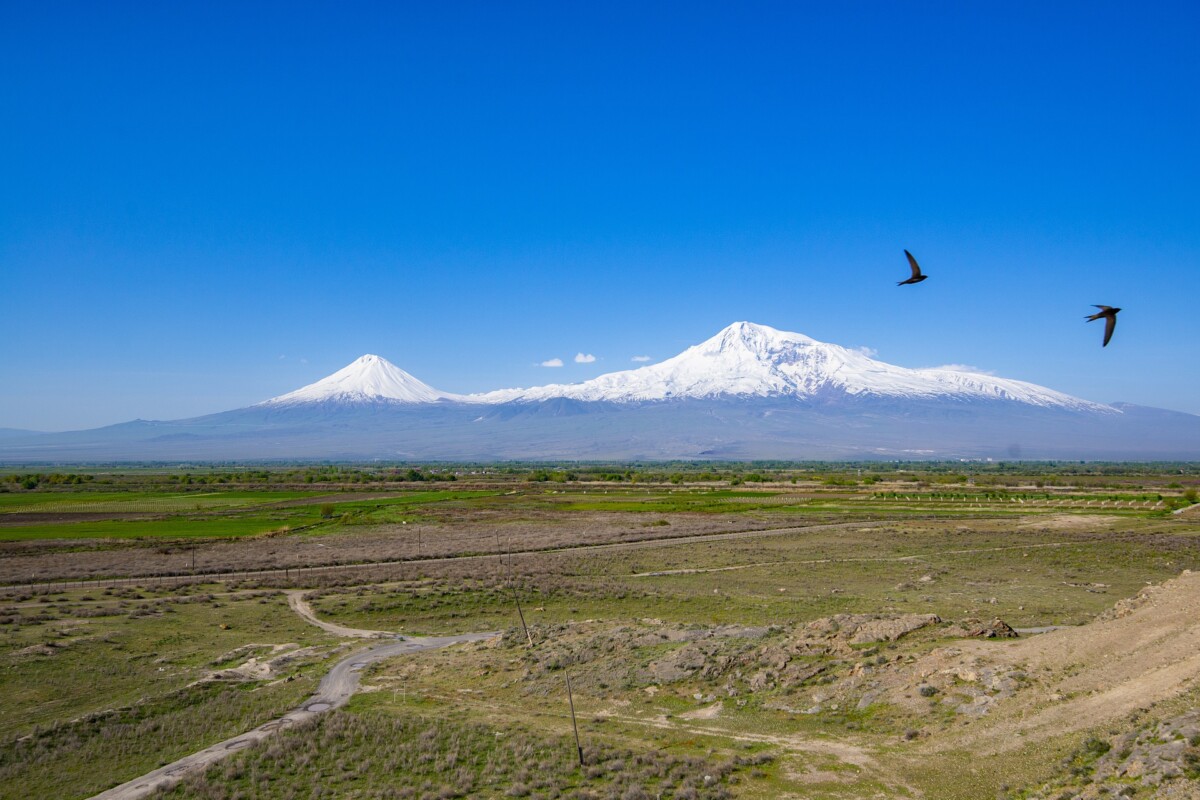 Areni  – A small village in the south of Armenia best known for its wine production and home to the Areni-1 complex where the earliest known winery in the world was uncovered. It’s a 6100-year-old winery that defines Armenia as one of the oldest wine producing regions of the world with endemic grapes. The wine making tradition is preserved until now and you can enjoy a set of local wines during annual Yerevan Wine Days festival.

Dilijan – A spa resort in the north-east of Armenia within the Dilijan National Park. The forested town is often referred to as the Armenian Switzerland by the locals. It features some traditional Armenian architecture on cozy and charming Sharambeyan Street where one can visit the craftsman’s workshops, a gallery and a museum or just have a nice stroll through its narrow romantic streets. 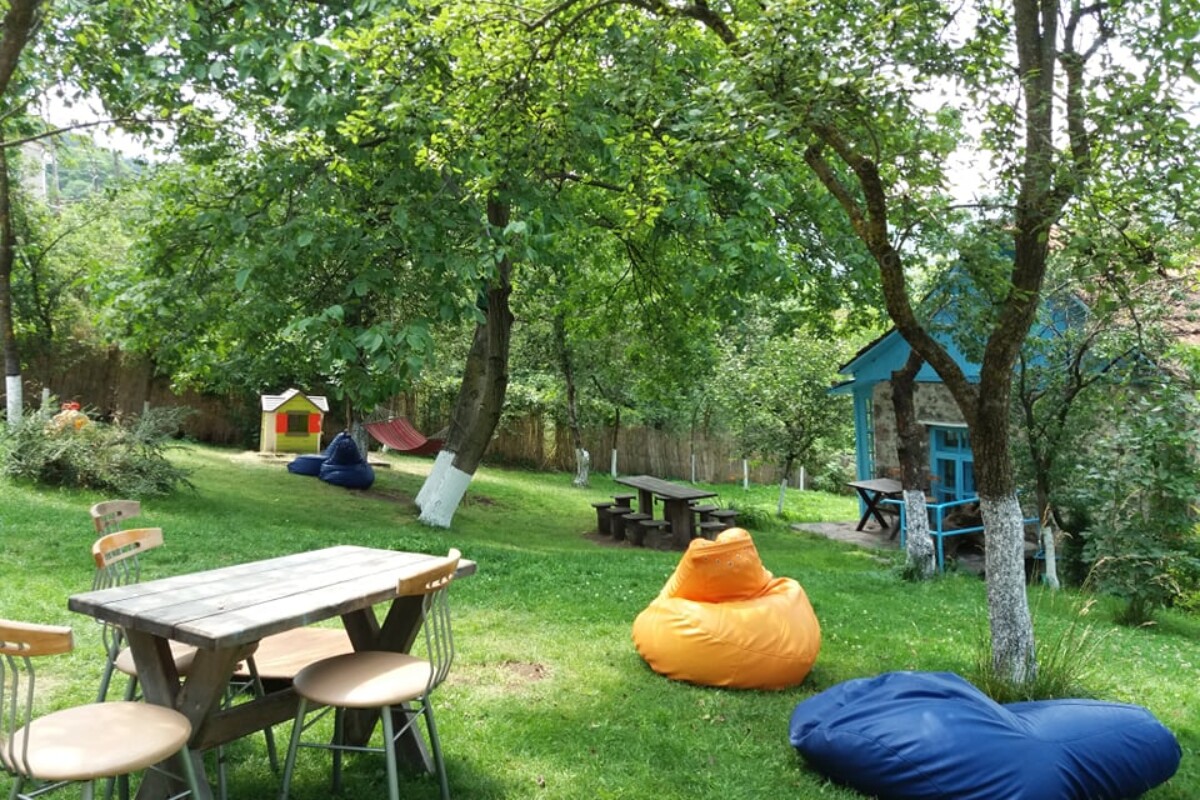 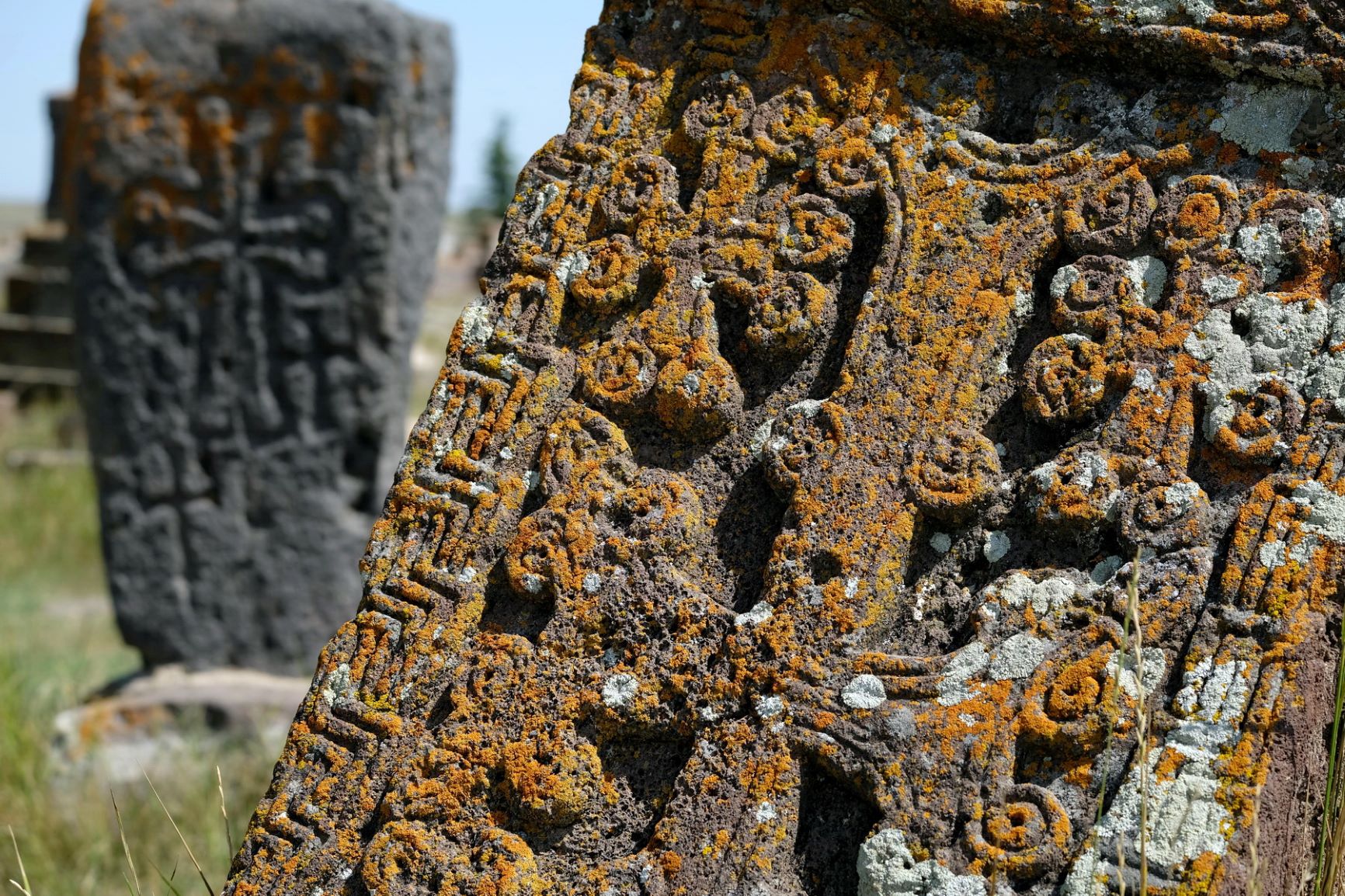 Noraduz – A unique place in the world. It’s a village located near Lake Sevan which cemetery has the largest cluster of khachkars – memorial stele bearing a cross. Also known as Armenian cross-stones they are a national symbol and are unique to Armenia. Since 2010, khachkars, their symbolism and craftsmanship are inscribed in the UNESCO list of Intangible Cultural Heritage.

Garni – A village to the south-east of Yerevan which hosts the only pre Christian standing building in the region and the CIS countries. The Pagan temple dedicated to the God of Sun dates back to the 1st century AD. It’s at the edge of a triangular cliff overlooking Azat River gorge along the sides of which are cliff walls of well-preserved basalt columns called “Symphony of the Stones”. 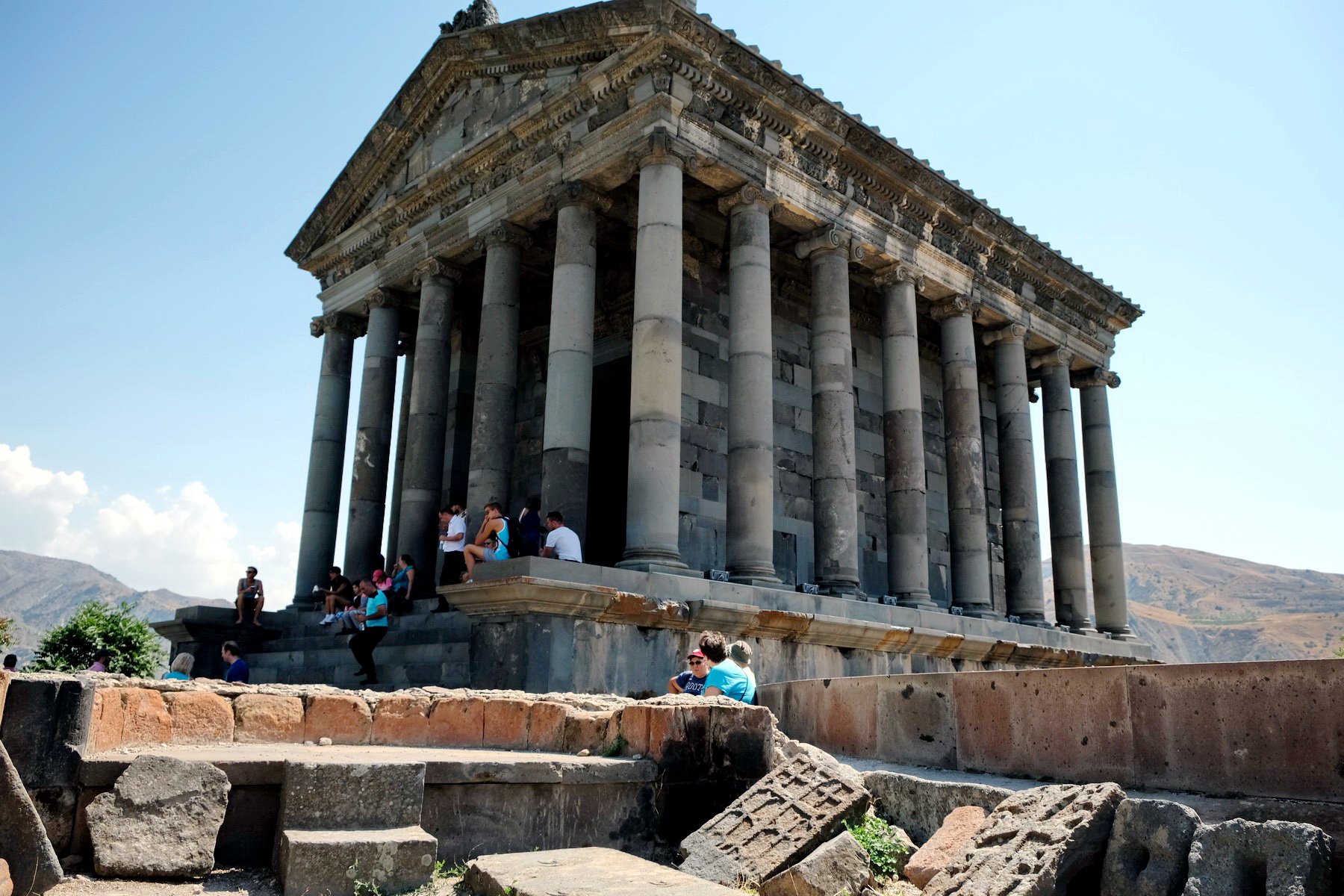 Echmiadzin – The religious center of Armenia 20 km west of the capital. The city is best known as the location of Etchmiadzin Cathedral and Mother See of Holy Etchmiadzin, the center of the Armenian Apostolic Church, one the first Christian churches of the world. The city is home to other early Christian period churches with unique architecture and all are listed among UNESCO World Heritage Sites.

Geghard – Geghardavank means “the Monastery of the Spear”, originates from the spear which had wounded Jesus at the Crucifixion, allegedly brought to Armenia by Apostle Thaddeus and preserved in the monastery till 17th century. It’s a partly cave monastery of 12-13 century and is listed in UNESCO highlights with enhanced protection status. 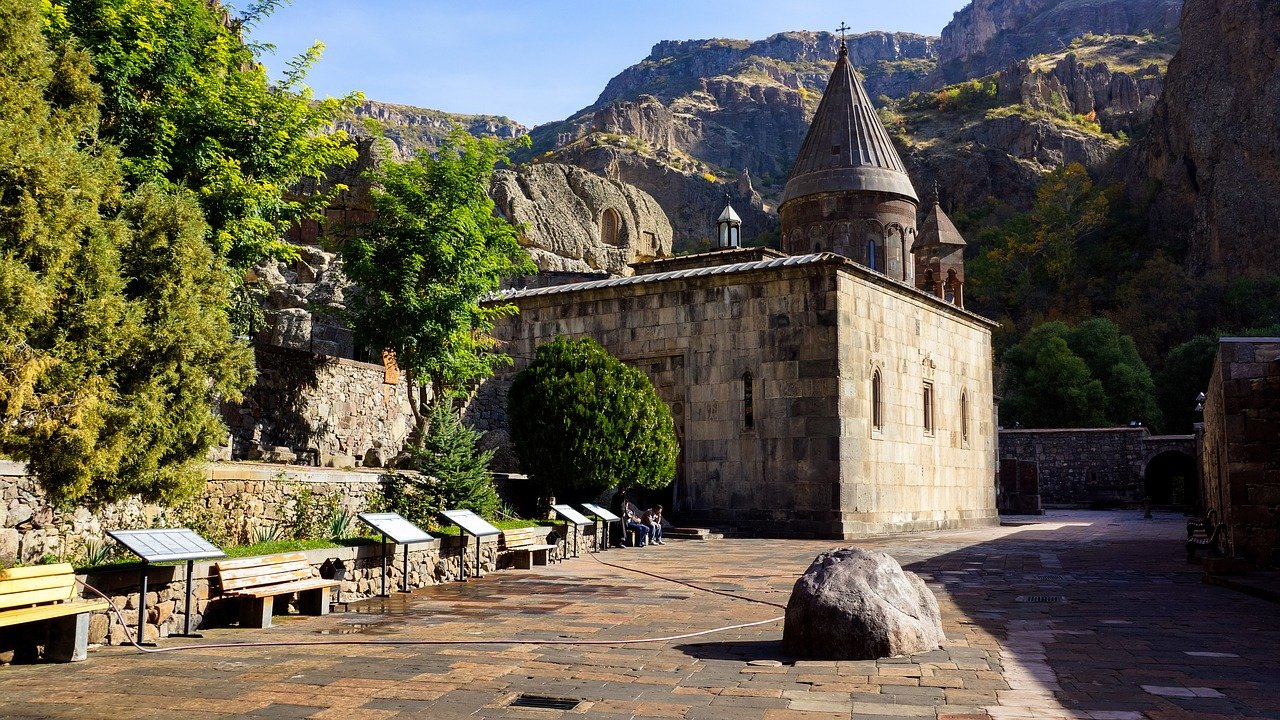 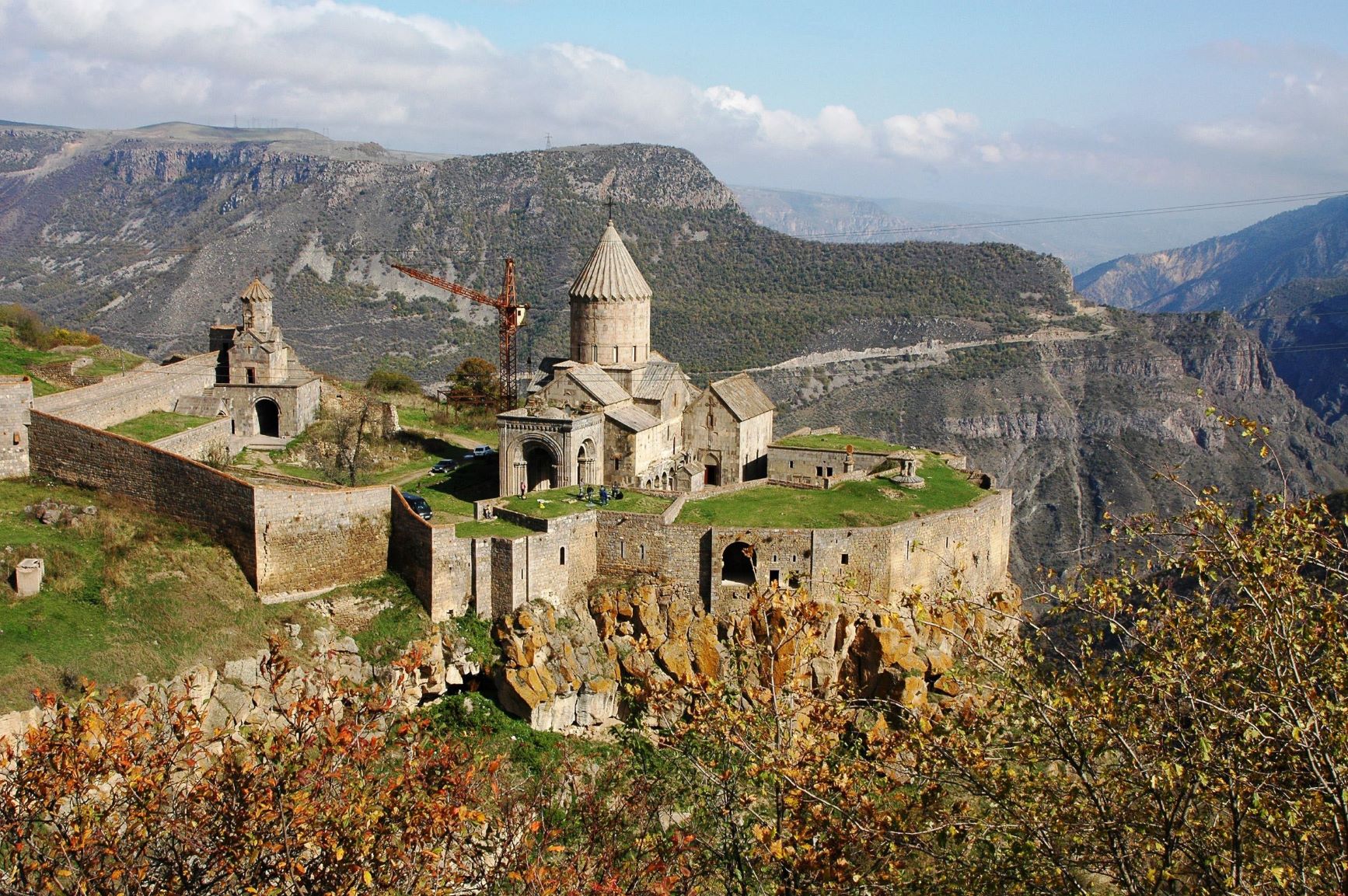 Tatev  – This village can be found in the southern gates of Armenia. It’s home to a huge medieval monastery which is located on a large basalt plateau near the village. It hosts a station of the Wings of Tatev – the world’s longest non-stop double track aerial tramway. Get on the tramway and have an unforgettable trip to the monastery overlooking the magnificent gorge of Vorotan river.

Gyumri  – The second-largest city in Armenia in the northwestern part of the country. By the end of the 19th century, when the city was known as Alexandropol, it was one of the largest cities of Russian-ruled Eastern Armenia. Throughout centuries, Kumayri-Gyumri was labeled as the “city of crafts and arts” and it’s the cultural capital of Armenia. It has a well preserved historical center where different local and international festivals and cultural events are held. 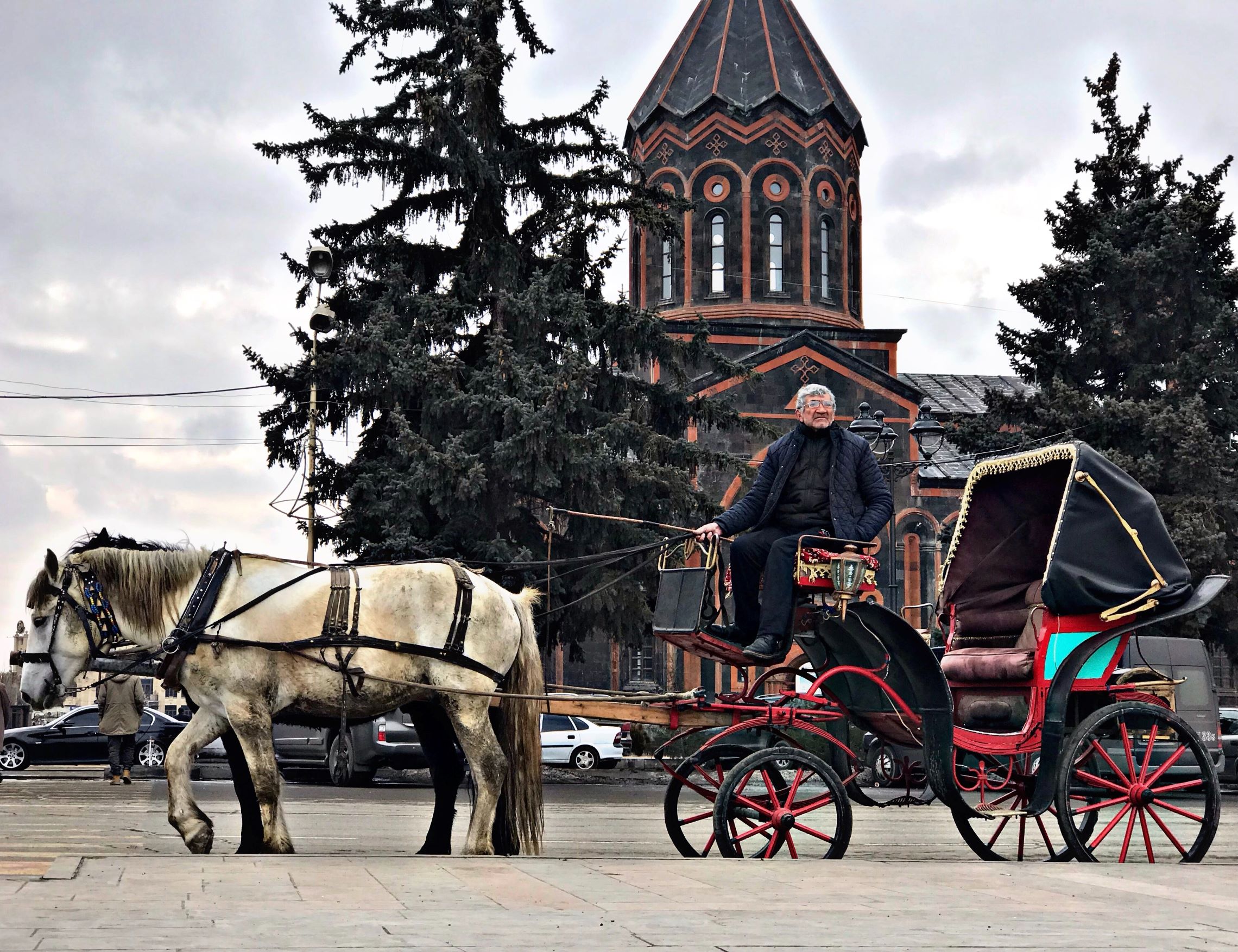