Meet in Georgia LTD is a Destination Management Company, based in the capital of Georgia, Tbilisi, in the heart of the South Caucasus region. As an Inbound Tour Operator the company offers its service all over Georgia.

With reliable partners in neighboring countries they also offer combined tours covering the whole region between the Black Sea and the Caspian Sea, the Greater and Lesser Caucasus Mountains. Meet in Georgia LTD was founded in 2014 when the field of tourism was starting to grow significantly in Georgia. They gathered around a group of people with an experience of working in the field for a number of years, those who wanted to increase in quality and orientate on the innovation as well as accomplish their ideas.

Since then, their company offers tailor-made tours and package tours both for groups and FITs. The area that the tours cover thematically is quite vast and so is the number of the local service providers they work with. They offer the tours of diverse levels of difficulty and specifics that range from the classic tours, the hiking, wine, gastronomic and musical tours, to the adventure, deluxe and incentive tours. Moreover, they constantly look out for new touristic routes and destinations at first hand, explore them and offer their visitors unique product matching their budget and wishes.

Those working in their company are outstanding for their attention to the details of the tour. In the planning of the program, they depart from our clients’ general requirements and wishes that they then specify with their experience and creative attitude and replenish with the details that can allow the desired result: satisfaction and excitement of the tourists.

• Walk in the narrow streets of Tbilisi Old town and discover the cultural mix and variety of the ancient and the modern .

• Take a relaxing bath and a massage in the famous Sulphur baths of Tbilisi, which gave the name to the city.

• Explore delicious variety of Georgian cuisine in a traditional restaurant: Khachapuri (a cheese-pie), Phkali (different appetizers made of vegetables, nuts and spices) or Khinkali (dumplings with meat).

• Be amazed by traditional Georgian dances and music and try to repeat some steps yourself.

• Listen to Georgian church or folk polyphony in which three voices flow in perfect harmony, representing The Holy Trinity.

• Visit the treasury of the Museum of History in Tbilisi with an unique collection of Golden artifacts from the period of the Golden Fleece.

• Take time for an off-road drive, horse-riding and hiking in one of the remote regions of the Greater Caucasus Mountains and be charmed by the beauty of the nature and hospitality of the local people.

Georgia is a country with a variety of breathtaking natural beauty, a remarkable number of early Christian architecture, extraordinary cultural diversity, delicious local cuisine and over 8000 years of wine tradition.

The country combines the stunning natural beauty of the high mountains of the Greater Caucasus (over 5000m), the volcanic formations of the Lesser Caucasus range, the Black sea coastline with deserts, vineyards, lakes and forests, all of this on the territory of 69700 km². The population of the country is approx. 3.7 million. 1.4 of whom live in the capital city of Tbilisi situated on the crossroads of East and West and enchants visitors with its unique atmosphere.

The climate of Western Georgia is subtropical with high humidity and offers great conditions for citrus and tea plantations, while the fertile land of the East contributes to turning it into a small paradise with an abundant array of fruits, vegetables and vines flourishing there. Georgia has everything for people who love the outdoors. A wide variety of climate zones as well as natural landscapes, the sea as well as the mountainous, make Georgia a popular destination for trekking, camping, horse-riding and all kinds of outdoor pursuits.

In addition, Georgia is considered to be one of the oldest countries in the world. Recent finds at the archeological site of Dmanisi have been proven to be the oldest evidence of humans discovered outside of Africa, dating back 1.7 million years. The first states on the territory of modern Georgia were formed in 12-7th century BC. In Greco-Roman mythology, the Georgian kingdom of Colchis is most notably recognized as the homeland of Medea and as the travel destination of the Argonauts in search of the Golden Fleece.

For centuries, and to this date, religion has played an important role in Georgia. St. Andrew is believed to have preached on Georgian land as early as the 1st century. However, it was St. Nino from Cappadocia, who officially introduced Christianity in 337. Visiting the country one can see the ancient basilicas from 5-6th centuries, as well as the cross-shaped churches with beautiful domes of a later period and monumental cathedrals in the Roman style such as Alaverdi, Svetitskhoveli and Bagrati Cathedral. Some of them are UNESCO World Heritage sites.

The key to appreciating Georgian culture lies in its musical folklore. Georgian polyphonic songs and traditional dances express the haunting beauty of Georgian nature, its national temperament, its everyday life and, of course, its traditional values. Last but not least, Georgia is a paradise for gourmets and for wine lovers. It is believed that the secret of high life expectancy in Georgia lies in the unique balance of fresh products and a moderate use of wine.

Tbilisi – The city where the East meets the West enchants with its history, colorful architecture and dynamic lifestyle. Located in a dramatic valley setting, the city impresses with an unique mix of natural beauty and its picturesque Old Town and eclectic Art Nouveau architecture. Not to forget the world-famous thermal baths that gave the city its name by the old Georgian word for ‘warm’, tbili. 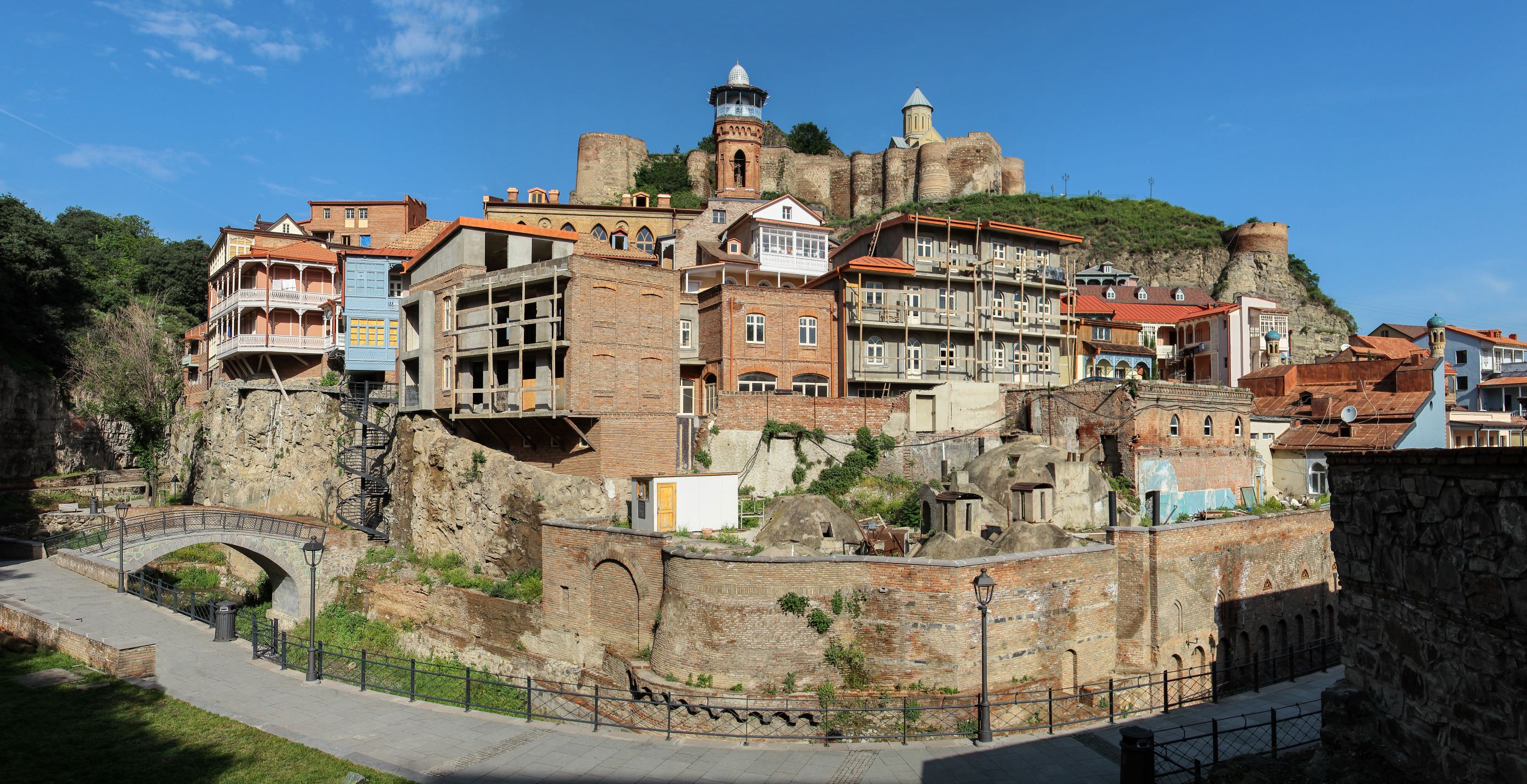 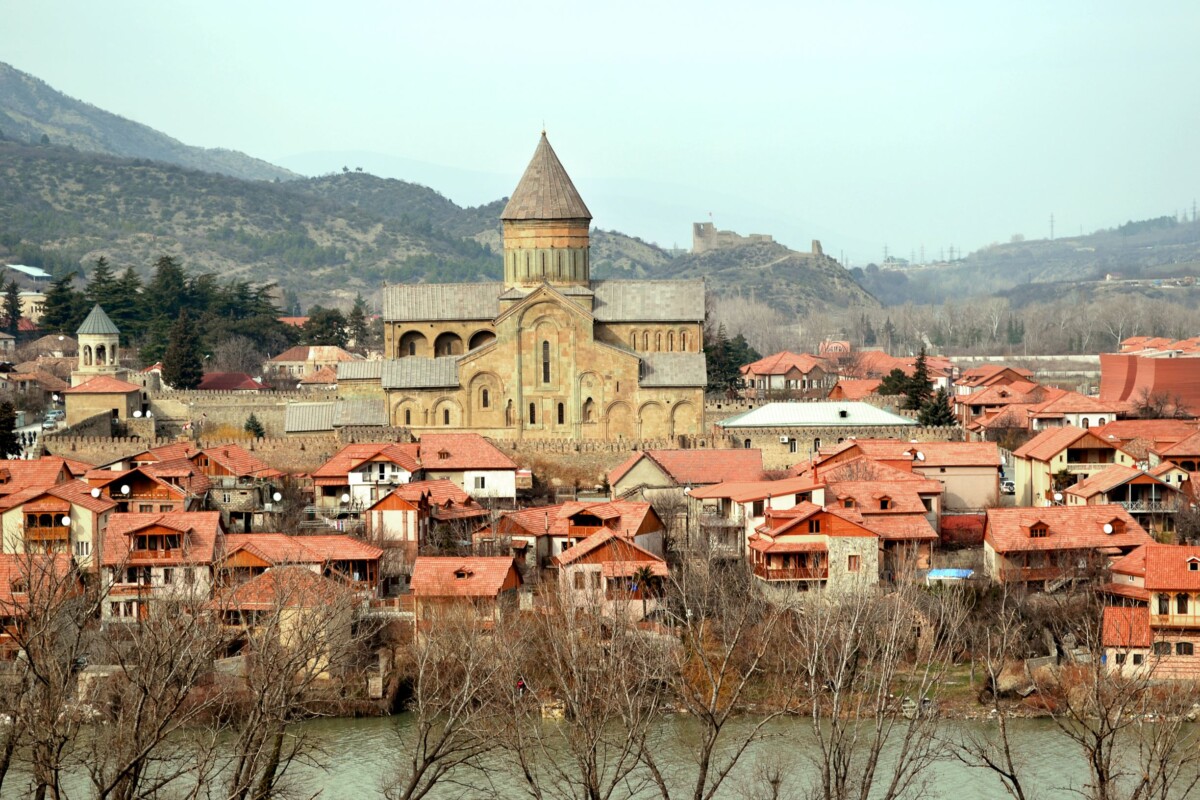 Mtskheta – The old capital and religious centre of Georgia lies on the confluence of the Aragvi and Mtkvari Rivers. The city’s old churches are rated as outstanding examples of medieval religious architecture in the Caucasus. Moreover, it is the most sacred pilgrimage city in Georgia and has been declared a UNESCO World Heritage Site.

Vardzia – The most remarkable cave town from the 12th century, which is known in history as the Golden Age of Georgia. Located in the south of the country, this underground monastry and fortress was built for Georgia’s only femal monarch, the “mountain queen” Tamar. This huge complex of man-made caves used to have more than 6.000 rooms on 19 levels of which only a small part can be visited nowadays. 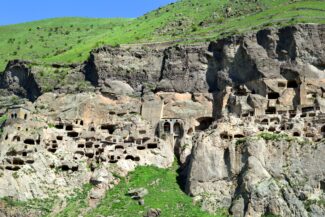 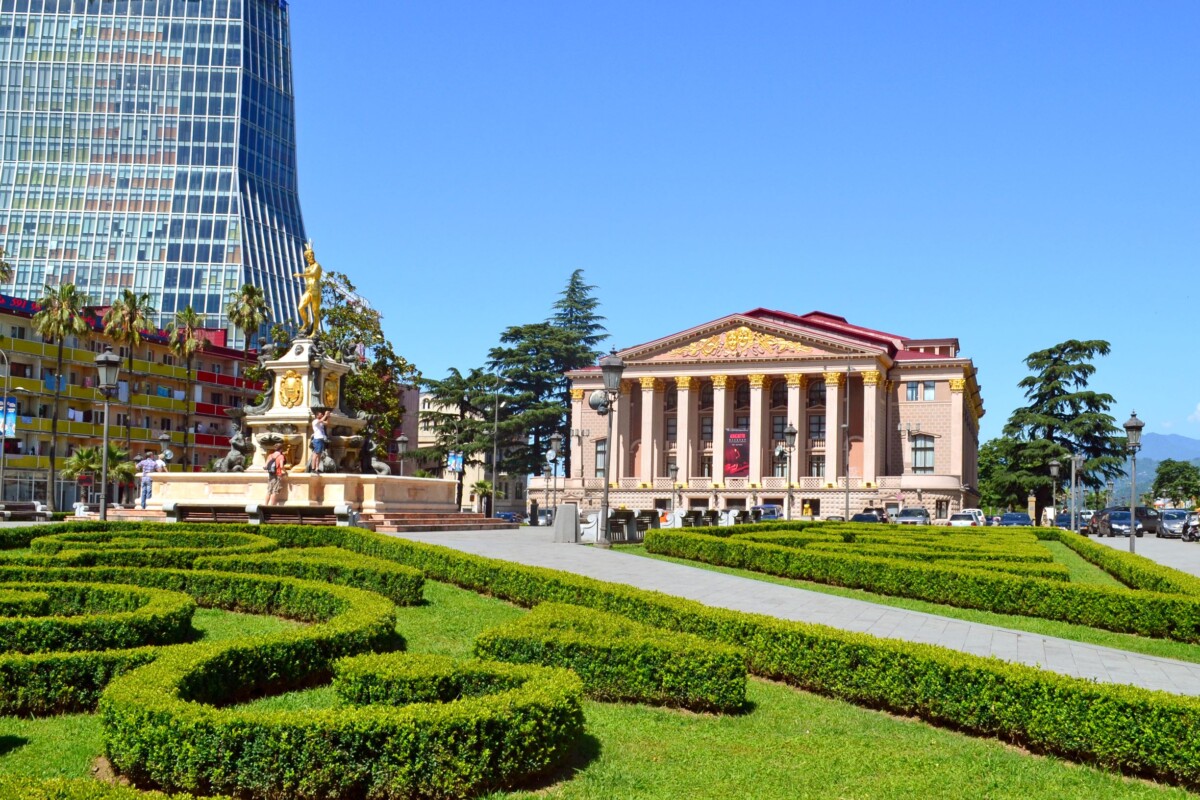 Batumi  – While being the main port of Georgia at the Black Sea coastline, the city is mainly a getaway for tourists, drawn in by the subtropical climate, pebble beaches, and hot sulfur springs that rise in the region. Also known as the “Las Vegas of the East”, Batumi offers a variety of architectural styles that reflect the city’s long and eventful history. A particularly eye-catching attraction is the alphabet tower, a modern, 130-meter-high structure with the 33 letters of the unique Georgian alphabet depicted on the sides.

Stepantsminda – Commonly known as Kazbegi, this settlement is located at the foot of Mt. Kazbek (5047m), one of the highest and most beautiful peaks of the Caucasus, where Prometheus was chained according to an old Greek legend. Stepantsminda location is absolutely stunning and the city makes the ideal starting point for hikes and bike tours through the surrounding mountains and valleys. 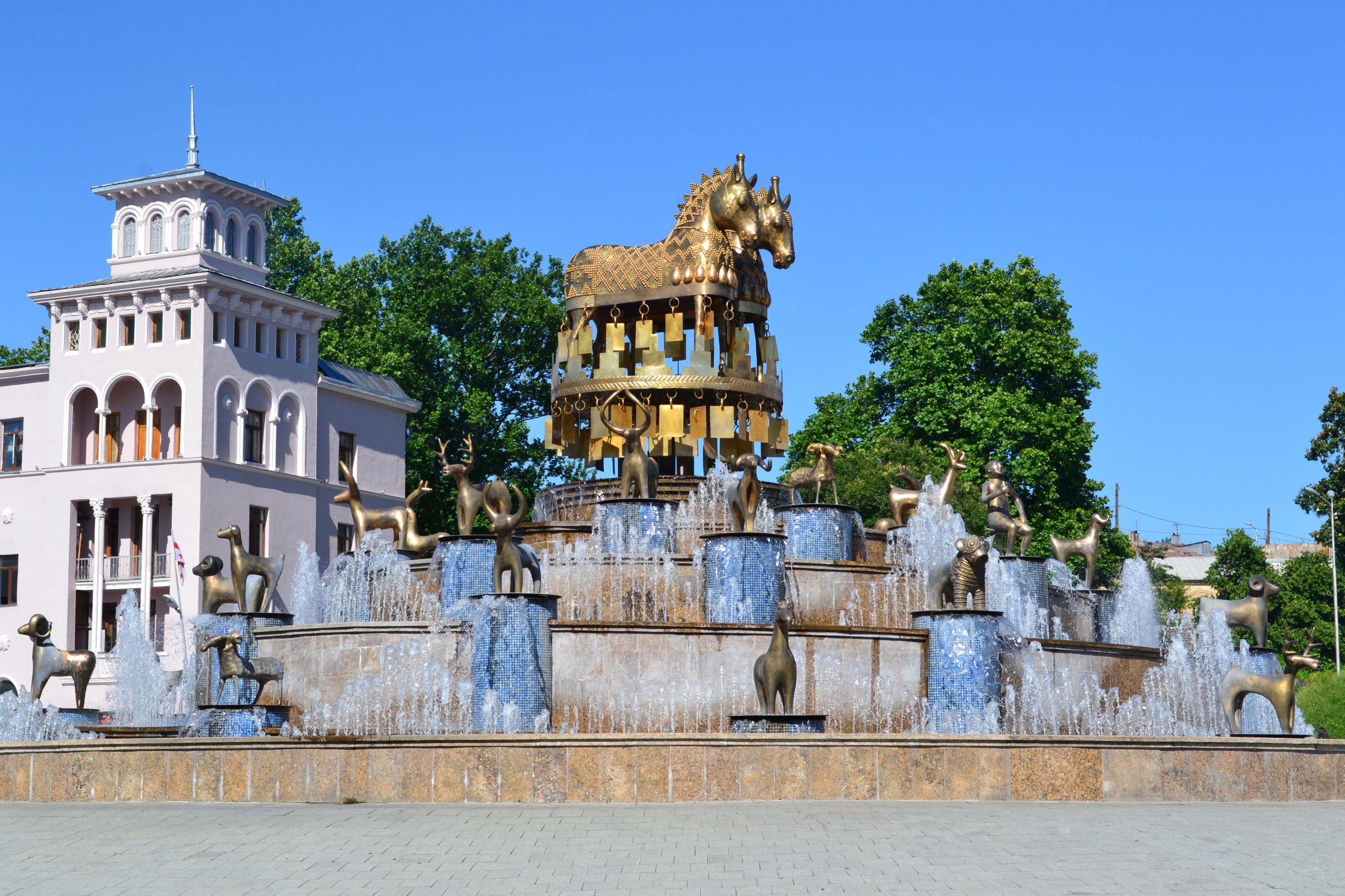 Kutaisi – Known as the rich kingdom of Colchis, where Argonauts sailed in search of the Golden Fleece boasts now UNESCO World Heritage sites and a number of karst caves and canyons in the surrounding. The city used to be the capital of the Kingdom of Georgia in the 11th century and is one of the oldest continuously inhabited cities in the world.

Svaneti – Nestled high in the Greater Caucasus Mountains, the Upper Svaneti province (UNESCO World Heritage) is an exceptional example of mountain scenery scattered with medieval type villages. The area is so remote that it was never tamed by any ruler. Symbol of Svaneti are the defensive stone towers (koshki), most originally built between the 9th and 13th centuries. More than 200 koshkis have been preserved to this day. 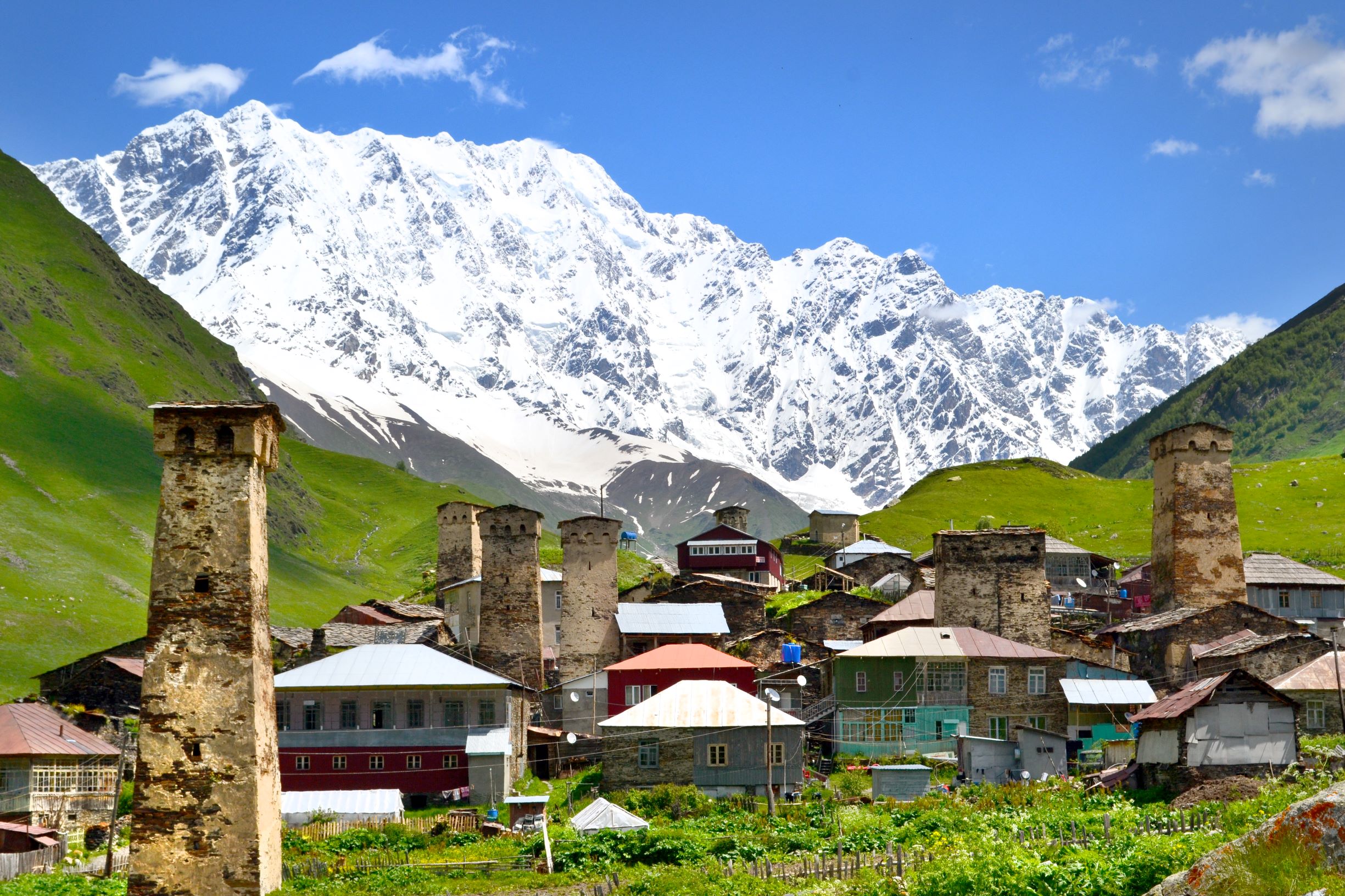 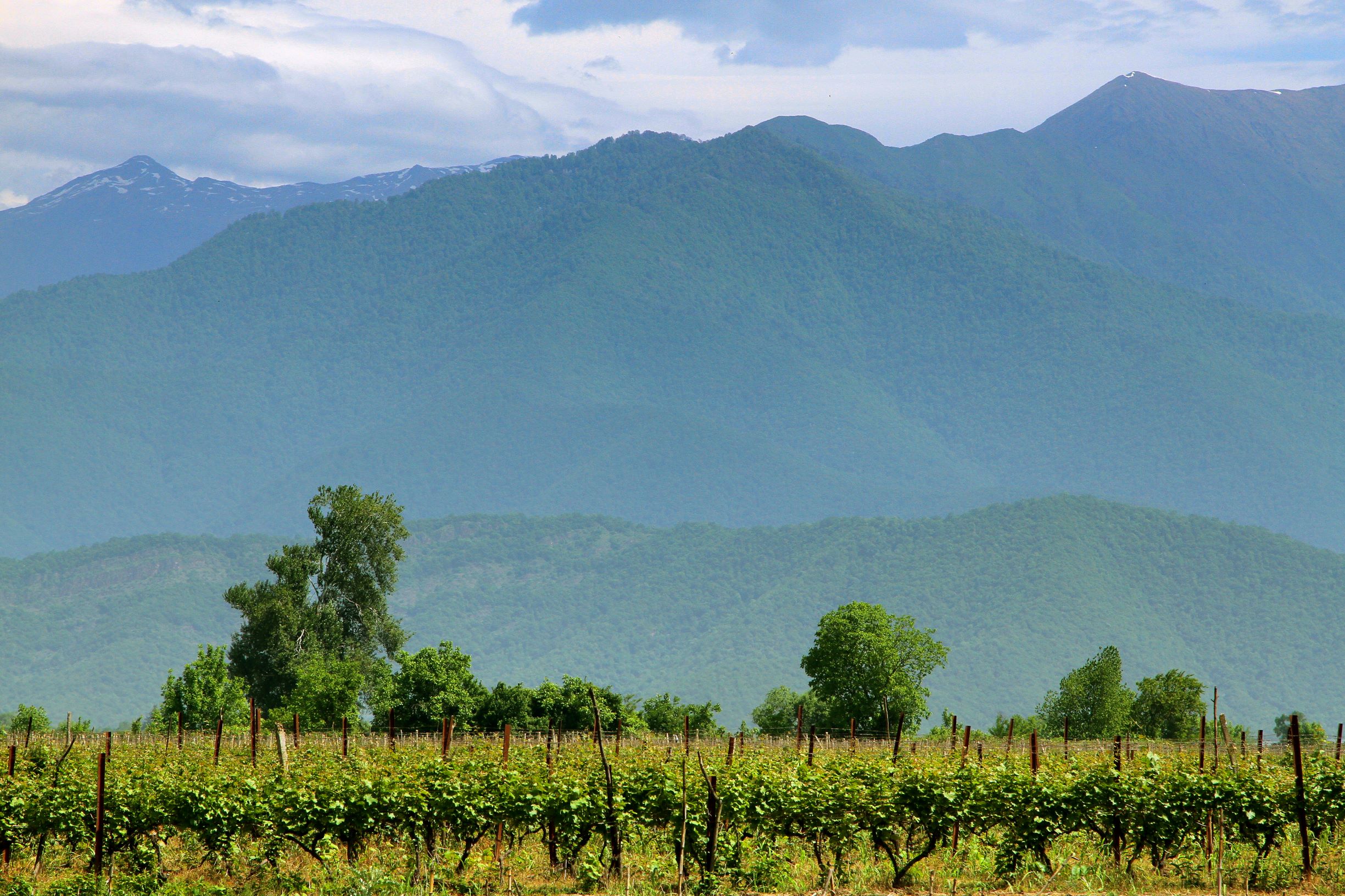 Kakheti – Georgia’s wine region in the Eastern part of the country is famous for its traditional 8000 years old viniculture (UNESCO World Heritage) and for the genuine hospitality. Ancient sites reach from the Tuscan-looking hillside town of Sighnaghi to the monastery cave complex of Davit Gareja. But also beautiful forests, alpine lakes, waterfalls, vast plains, and even a radiant desert can be found here.