Jordan and Beyond Tours, Destination Management Company (DMC), is your ideal partner to discover the Middle East wonders. A dynamic-E Commerce DMC with passion to serve guests of Jordan, the experiences of their staff extend for more than 15 years at least in travel and tourism business in the Middle East area.

They are based in Amman – Jordan, specializing in high quality FITs and GITs businesses, they cater needs of group tours, intrepid groups, leisure, religious, cultural, special interest, MICE and more. They are committed to provide their clients with the best products, highest standards of services, and lowest possible prices, yet not compromising on quality.

Jordan and Beyond present to the world extraordinary adventure-based experiences with daily scheduled group tours delivered in five languages (English, Spanish, German, Italian and French) and weekly adventure scheduled groups in English. They offer more than two hundred private tours, suiting all styles and interest groups. These can all be found in various digital brochures in addition to the website, respecting green policies to reduce printing when possible.

With big-named global partners all over the world having access to these digital brochures showcasing Jordan’s ancient history and modern-day lifestyle, Jordan and Beyond offers new and exhilarating tours to stimulate, educate and create lifetime memories for guests. Listening to what clients want, then providing quality service, flexibility, and customer satisfaction guarantees that your experience with Jordan and Beyond Tours will be memorable and rewarding on every level.

• Drive through the 330 km lonh Kings Way to Petra passing by Madaba – the city of mosaic.

• Relax, swim, and indulge at the lowest point on earth at the Dead Sea.

• Be amazed by the unique rock formations and ancient rock paintings at Wadi Rum desert.

• Visit the faszinating sight of Petra, a wonder of the new world, which facades were carved directly into the rock by an ancient nomad tribe.

• Discover one of the best preserved sites of the Roman period outside of Italy – the ancient city of Jerash.

• Stroll through the city streets and explore the different neighborhoods of Amman.

• Take a refreshing bath in the Red Sea and visit one of the famous souks (markets) of Aqaba.

• Look at the map in Madaba, which is made up of more than 2 million mosaic pieces and depicts Jerusalem and the Holy Land.

• Enjoy the unique panoramic views of the Jordan Valley at the 1000 year old castle that towers above the city of Ajloun.

Jordan and Beyond Tours

Jordan is a tourist destination for many visitors from different countries of the world. This is due to its attractiveness and polarization factors that satisfy the aspirations of those coming to it from everywhere. Perhaps, the most prominent of which is the political stability in it, in addition to its distinctive geography, and the beautiful natural features it contains, in addition to the historical heritage present in it. Not to forget the friendly weather all year round with a moderate winter, pleasant summer, and at least 300 sunny days a year.

The country includes several archaeological sites of special importance and unique beauty in the world: The city of Petra or as it is also known as the Rose City, and the city of Jerash with its beautiful Roman columns; the Roman amphitheater in Amman, in addition to several other cities that contain castles and palaces wonderful archaeological desert, such as the cities of Umm Qais and Umm al-Jamal. The history of Jordan is full of ancient archaeological and historical heritage; Its lands have witnessed major human civilizations such as the Roman, Byzantine, Ottoman and Mamluk civilizations, which all inhabited the country and left behind a number of archaeological sites that have a special place.

Jordan is distinguished by its well-known and well-established progress in the field of medicine in the surrounding area, whether this is in modern hospitals, medical cities specialized in treating various diseases, or other medical institutions. Jordan also includes a group of sites that are rich in hot mineral water which are used for therapeutic purposes. These can be found in Hammamet Ma’in, Hamat al-Shouna al Shamaliya, Hamat al-Jordaniyah, Hamat Tabaqat Fahl, in addition to the Dead Sea with its unique water and clay which are an effective remedy for many skin diseases.

Moreover, religious tourism in Jordan is represented by visiting religious sites. The sites of Islamic battles, in addition to visiting ancient churches, such as the church in Madaba, Mount Nebo, and the site of the Baptism of Jesus Christ, are just a few of the interesting places that are spread all over the country.

Amman – The capital of Jordan and a city which geographically straddles seven hills and historically sits astride many centuries. The city’s modern buildings blend with the remnants of ancient civilizations. 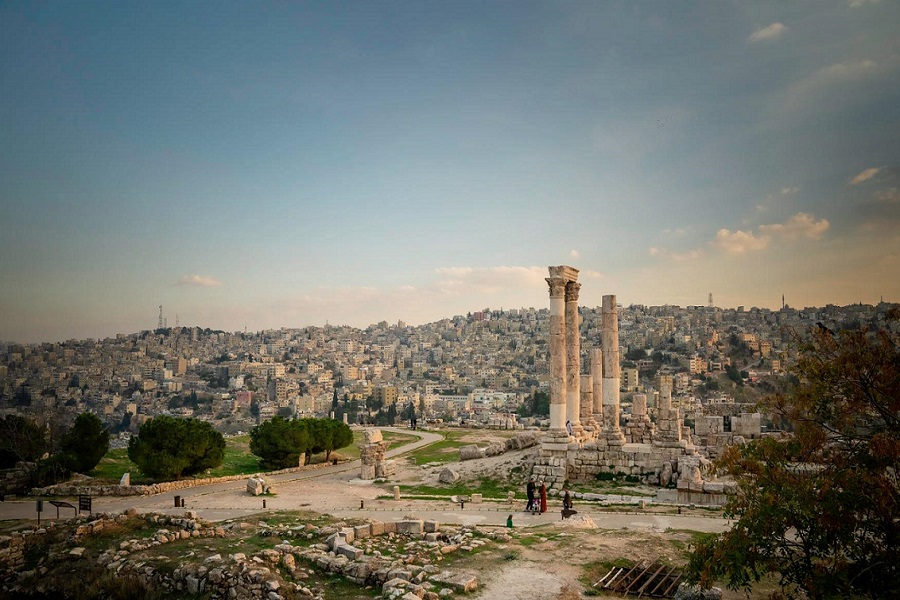 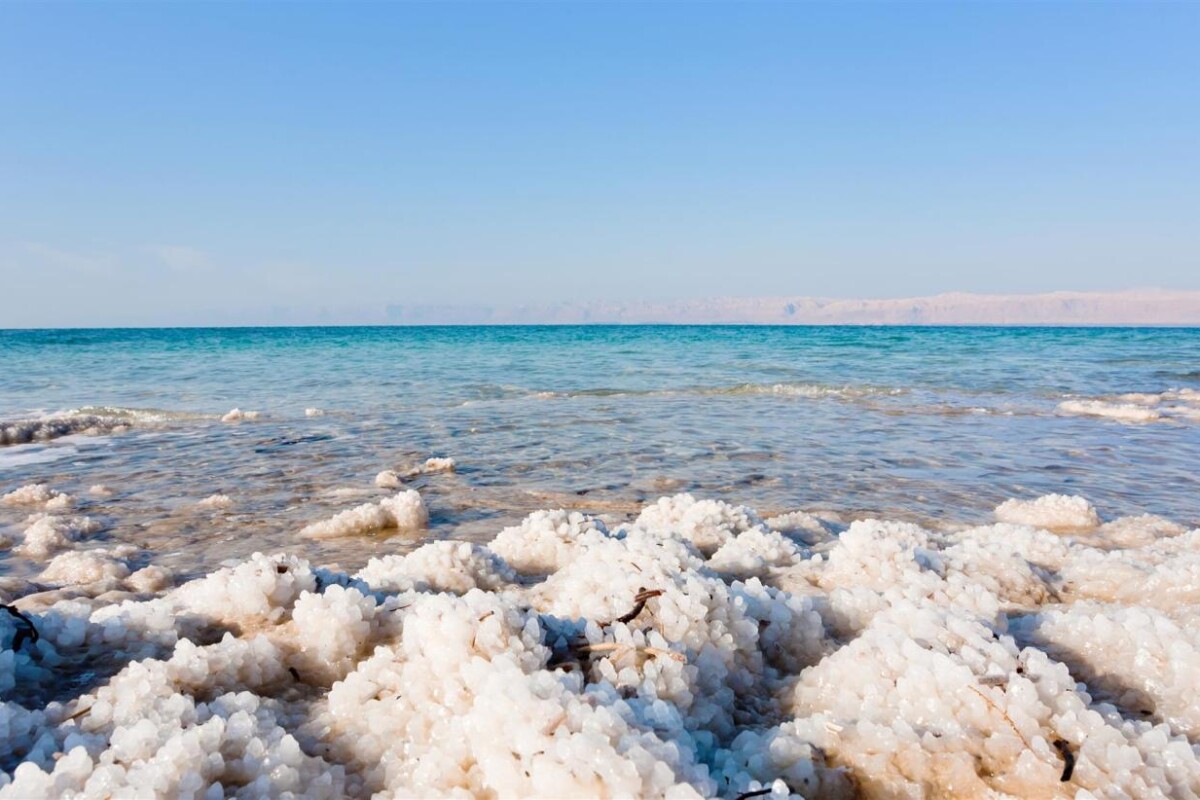 Dead Sea – The most spectacular site, Dead Sea which is at 400 meters below sea level is the lowest body of water on earth. Surrounded by arid hills, as devoid of life as the sea itself.

Jerash – The most spectacular Roman ruins out of Rome. The city’s many splendid monumental remains, still retain the atmosphere of the once thriving metropolis, famous in its own time for magnificent temples, amphitheaters, and plazas. 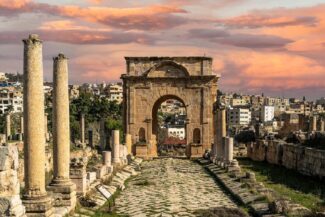 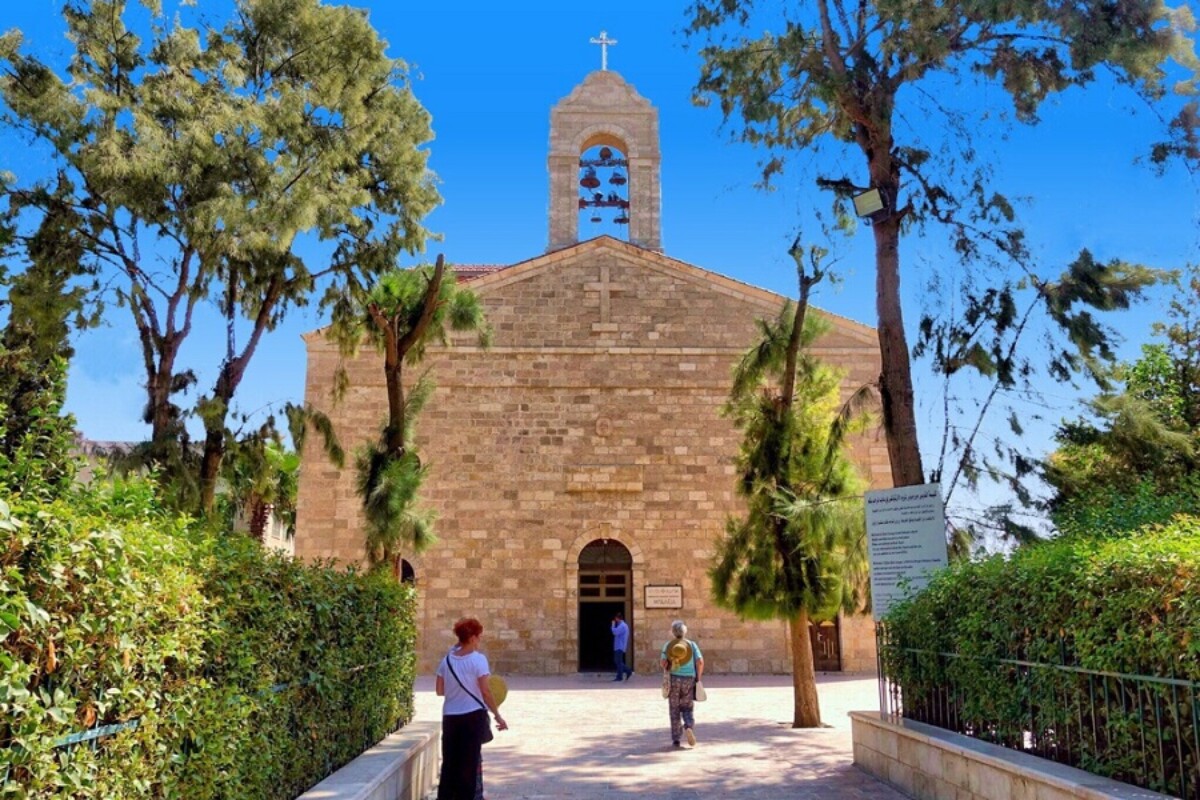 Madaba  – Just 20 minutes south of Amman, on the Kings Highway, is the mosaic-filled city of Madaba. Crowned by a small church, this historic town lies in the middle of Jordan’s most fertile land. In many respects Madaba is a typical East Bank town which differs in one major aspect: underneath almost every house lies a fine Byzantine mosaic.

Baptism Site – The area from the Jordan river eastwards associated with the ministry of John the Baptist and the baptism of Jesus which is known as el-Maghtas today in Arabic. This is the place where Jesus was baptized by John The Baptist. 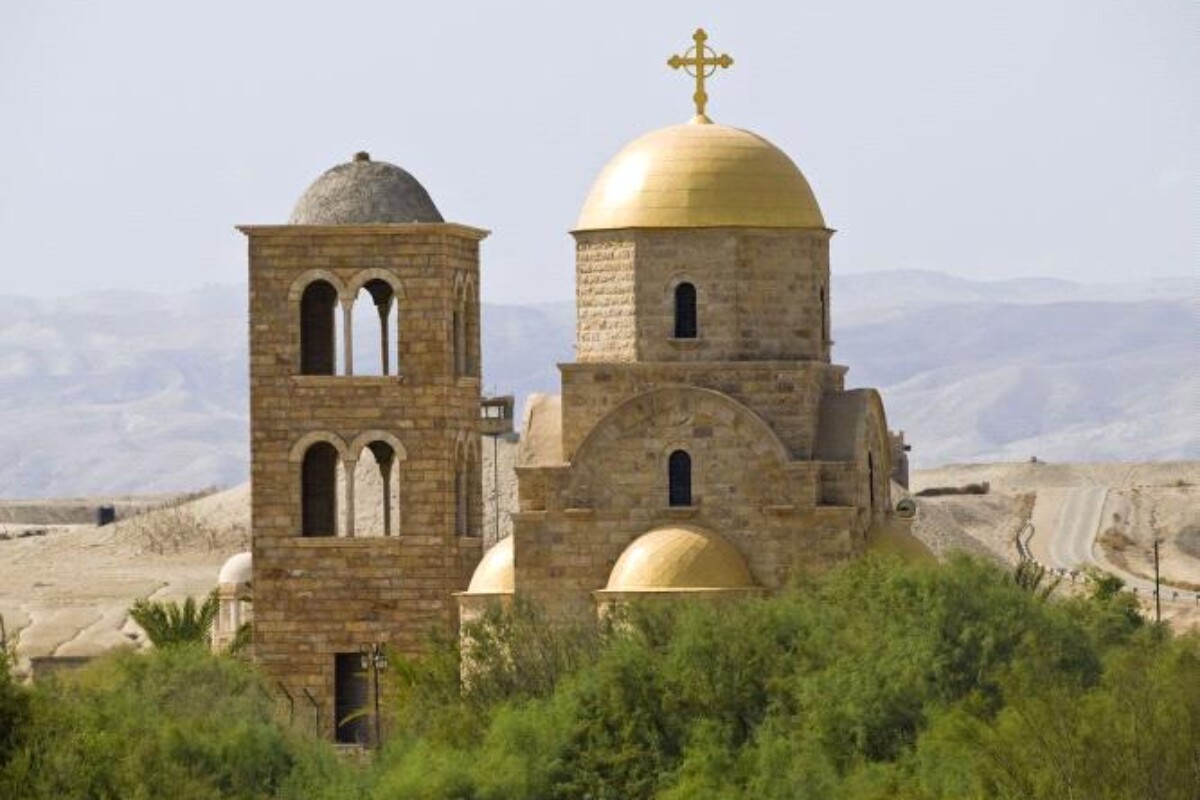 Petra – Hidden behind an almost impenetrable barrier of rugged mountains, the rock-carved city of Petra is full of mysterious charm and the second wonder of the new world. 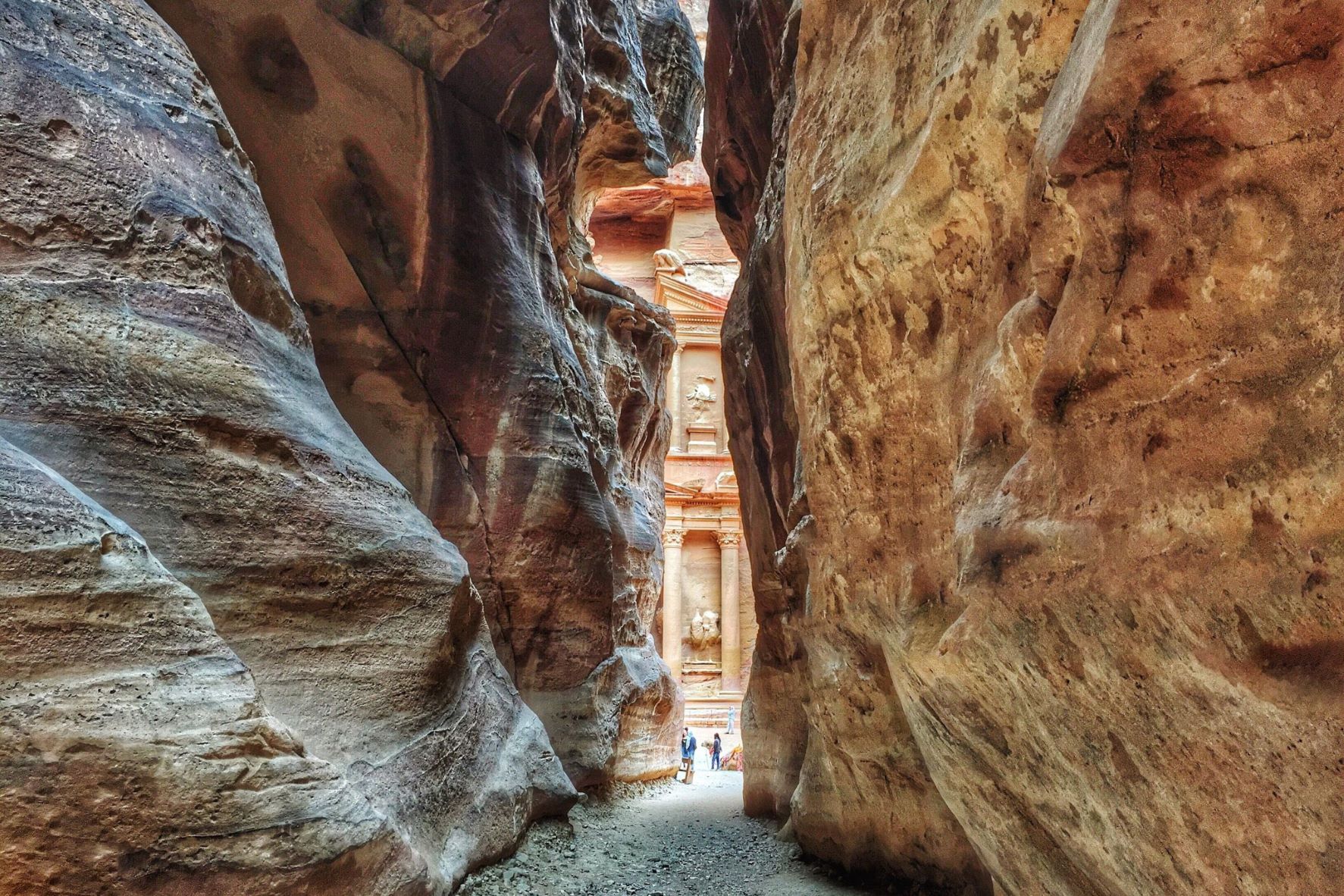 Wadi Rum – Stunning in its natural beauty, Wadi Rum epitomizes the romance of the desert. With its “moonscape” of ancient valleys and towering sandstone mountains rising out of the sand, Wadi Rum is also home to several Bedouin tribes who live in scattered camps throughout the area.

Aqaba – The small Red Sea port of Aqaba is unique and beautiful in a very special way. Encircled by rugged purple mountains that subtly change in mood and color as the day unfolds. On the beaches visitors soak up the sun before cooling off in the refreshingly cool waters. 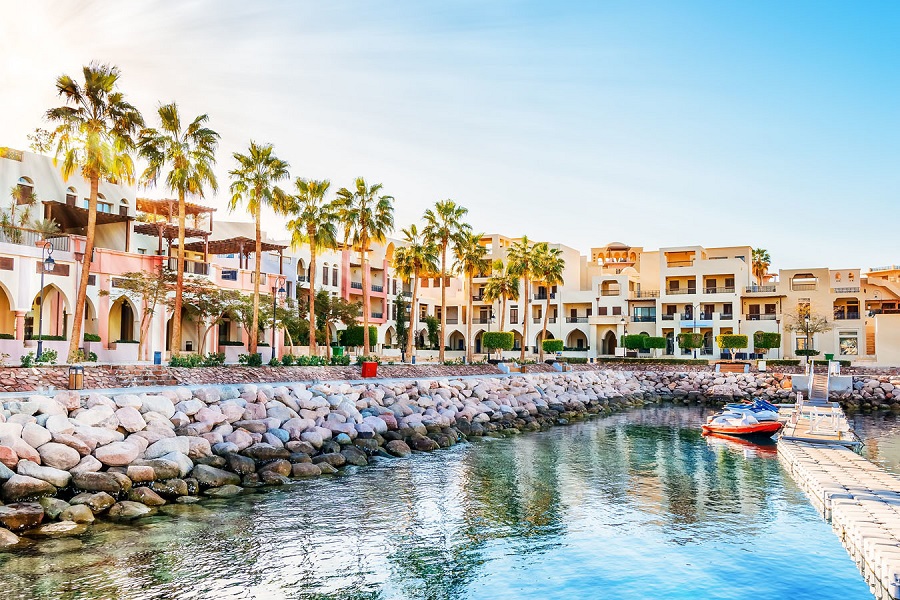 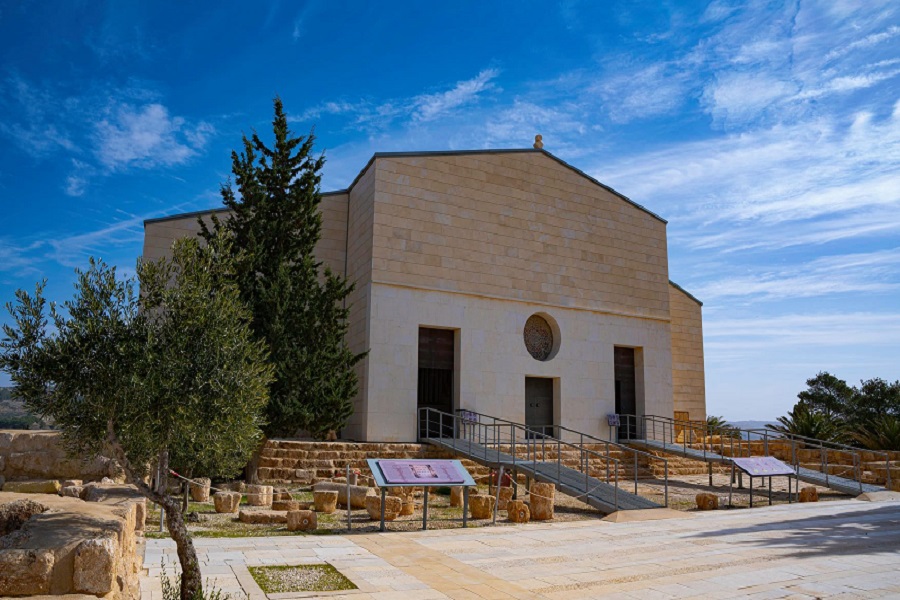 Mount Nebo – The site where Moses overlooked the Dead Sea. A magnificent panorama of Palestine is before you, and you can see the springs where Moses smote the ground to bring forth water. The church at Mt. Nebo houses sixth century mosaics which are being uncovered as you watch. Many believe this church was built over the burial site of Moses.

Um Qeis  – On a plateau overlooking the north Jordan Valley and the glinting blue waters of Lake Tiberias are the ruins of Qais, ancient Roman Gadara. Although not as extensive as the other cities of the Roman League of the Decapolis (the “Ten Cities”). 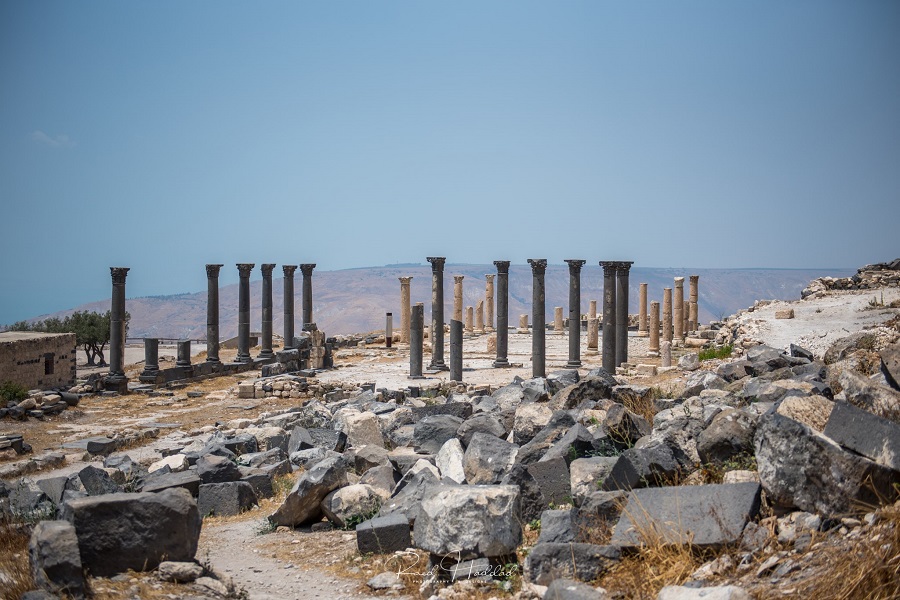