DMC Highlands is a Destination Management Company for service all over Scotland. They are based in Inverness, the heart of the Highlands and Scotland. With more than 28 years of experience in the travel trade, they have the expertise in arranging exclusive and unique tours in Scotland and beyond.

As an Inbound travel agency and DMC for Scotland, they use their local expertise to develop innovative experiences throughout the country. They bring creativity to their clients – whether it’s packaging existing tours in an appropriate manner or creating bespoke tours, they ensure the client experience comes first. Some of their existing portfolio includes Cultural, yoga/wellness/spa retreats, wildlife, birdwatching, golf, culinary, whisky, archaeology, half day and full day private tours, Outlander tours and Hidden paths of Scotland tours. They can also arrange specialised tailor-made tours, group tours, multi day tours, events, bespoke weddings and unforgettable honeymoons.

Their team consists of energetic, open minded people who with deal their job with devotion and creativity. They know how to create the holiday of you or your clients’ dreams and they also understand how to find that perfect combination of travel, accommodation and unforgettable experiences.

DMC Highlands is a division of Spirit Journeys Ltd an ATOL registered inbound/outbound travel agency and tour operator. The Spirit Journeys team are one of the devoted followers of the responsible tourism concept. Their aim is to improve people’s lives in host countries. Throughout their tours, they are continuously developing responsible activities and support a wide range of projects that are making difference in these communities. They always hire local guides, promote local products, food, culture and customs.

• Stroll through the ancient city of Edinburgh, the capital and UNESCO World Heritage .

• Sample the water of life “uisge-beatha” or Whisky as its more commonly known, at one of the many whisky distilleries (over 120 active distilleries at the moment).

• Hunt for the famous monster known as Nessie on Scotland’s famous “Loch Ness.”

• Improve your handicap and play golf on some of the top golf courses in the world.

• Discover the taste of Scotland while eating some of the local delicacies (like Seafood, Haggis, Black pudding, Tablet, Cullen Skink Soup, Porridge, Sticky Toffee Pudding, and many more).

• Lose your heart to the picture-perfect Highlands with reams of mountains, lochs, rivers and glens as far as the eye can reach.

• Take a leisurely drive around the Northern part of Scotland along the NC500 – Scotland’s’ answer to the Route66.

• Make your choice and visit as many of the more than 900 islands that make up Scotland as you can. Most of them with stunning scenery and white sandy beaches.

• Get active at Cairngorm National Park, the best place for walking, climbing, wildlife, water sports, and many more activities one can discover.

• Travel back in time and get lost in the streets of Glasgow, full of history, culture, and a distinct pub culture.

• Feel royal at Stirling Castle, childhood home of Mary Queen of Scots, and one of the best-preserved Renaissance buildings in the UK. 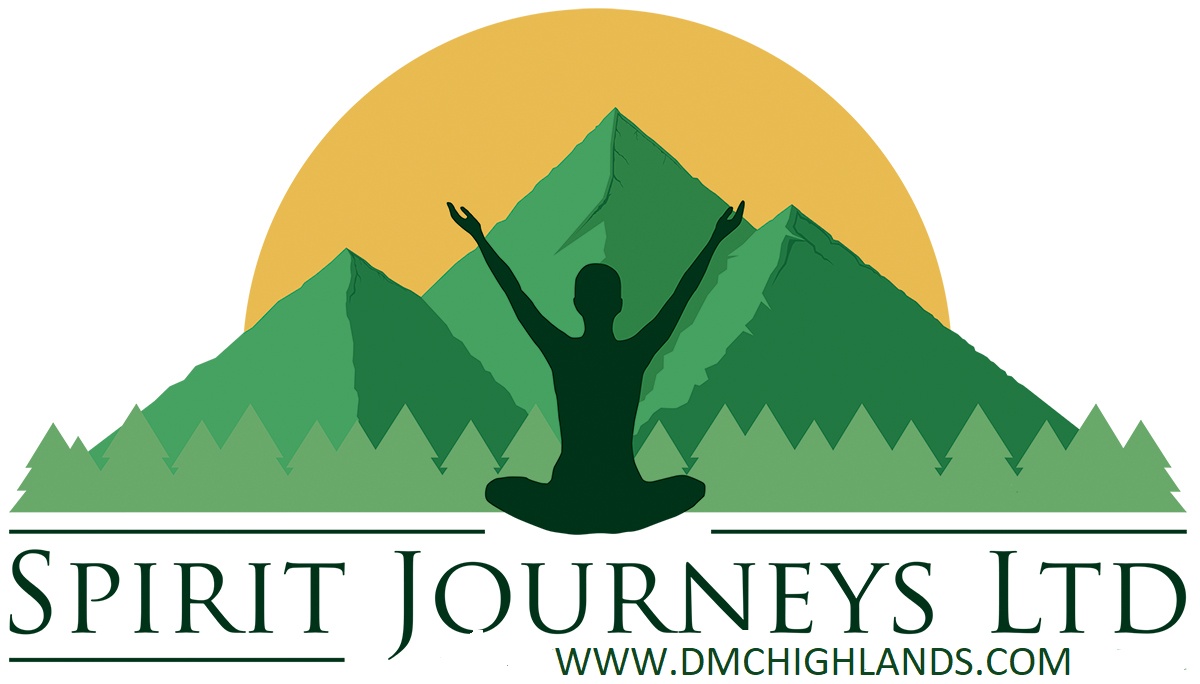 Scotland, land of Celtic myth, history and breath-taking beauty, has countless treasures crammed into its relatively compact territory – from big skies to ancient architecture, from spectacular wildlife to superb seafood and to top it all incredibly friendly, hospitable and down-to-earth people.

Outside the ancient and beautiful UNESCO World heritage capital city, Edinburgh, and other urban centres like Glasgow, once home to the largest shipping industry in the world but now a lively city of art, culture, great dining and bars, the visitor is entranced by mountains glistening with the silver threads of icy rivers and waterfalls tumbling from highlands to lowlands. Here you’ll find villages with stations where you need to put your hand out to request that a train stops and then suddenly, around the next mountain corner, a landscape peppered with gleaming lochs and expansive vistas.

Scotland has some of the last significant wilderness areas left in Western Europe. Here you can see golden eagles soar above the lochs and mountains of the northern Highlands, watch minke whales off the coast of Mull and spot otters tumbling in the kelp along the shores of the Outer Hebrides. It is also an adventure playground: you can tramp the sub-arctic tundra plateau of the Cairngorms, sea kayak among the seal-haunted mystic isles of the Outer Hebrides, mountain bike on world-class trails near Scotland’s highest mountain, trek along the valley or mountain trails and balance along tightrope narrow ridges between the peaks of the great Cuillins on Skye or take a speedboat ride into the legendary white water of the Corryvreckan whirlpool.

Scotland is a land with a rich and multi-layered history. A place where every corner of the landscape is steeped in the past. A deserted croft on an island shore been testament to generations past. These moors were once battlefields, caves that sheltered outlaws and rebels. The land boasts hundreds of castles, from the massive historic citadels of Edinburgh and Stirling to forbidding tower houses to the elaborate fortresses of Caerlaverock and Craigmillar. Scotland’s castles testify to an often turbulent past full of the sort of legend, intrigue and tragedy that inspired Game of Thrones, including the Red Wedding, as well as other popular series like Outlander. The battles that played a pivotal part in the building of these castles.

The nation is remembered and brought to life at sites such as Bannockburn and Culloden.
Visitors discover that Scotland’s restaurants can now compete with the best in Europe. Top-quality local produce means that you can feast on fresh seafood mere hours after been caught, beef and venison that was raised just a few miles away from your table, and vegetables that were grown in your hotel’s organic garden. Then there’s the uisge-beatha, the water of life or Whisky (no ‘e’) to top it all off. Savour a ‘wee dram’ of single-malt whisky and appreciate the rich, complex and evocative taste of Scotland.

Culturally too Scotland punches above its weight, from the poetry of Robert Burns to the modern crime fiction of Ian Rankin or even the songs of Emeli Sandé, Scotland’s cultural exports to the world are many and appreciated as much as the famous whisky, tweed and tartan. You certainly can’t beat reading Burns’ poems in the village where he was born or enjoying an Inspector Rebus novel in Rankin’s own Edinburgh pubs, or catching the latest Scottish bands at a music festival. Museums like Dundee’s Discovery Point and V&A, Glasgow’s Kelvingrove and Aberdeen’s Maritime Museum celebrate the enormous influence of Scottish engineers, inventors, artists, explorers and writers and in shaping the modern world. Discover why, as one historian put it, this is the country that invented the modern world.

Edinburgh – The capital of Scotland which holds two UNESCO designations for its medieval Old Town and its well-planned Georgian New Town. There are so many things to do and see, like a visit to the iconic castle, the world’s largest monument to a writer, Scotland’s crown jewels, world-class art, a walk through the underground to explore the city’s medieval past, climbing an extinct volcano known as Arthur’s Seat, and many more. Don’t miss having one of the world-famous whiskys while in town. 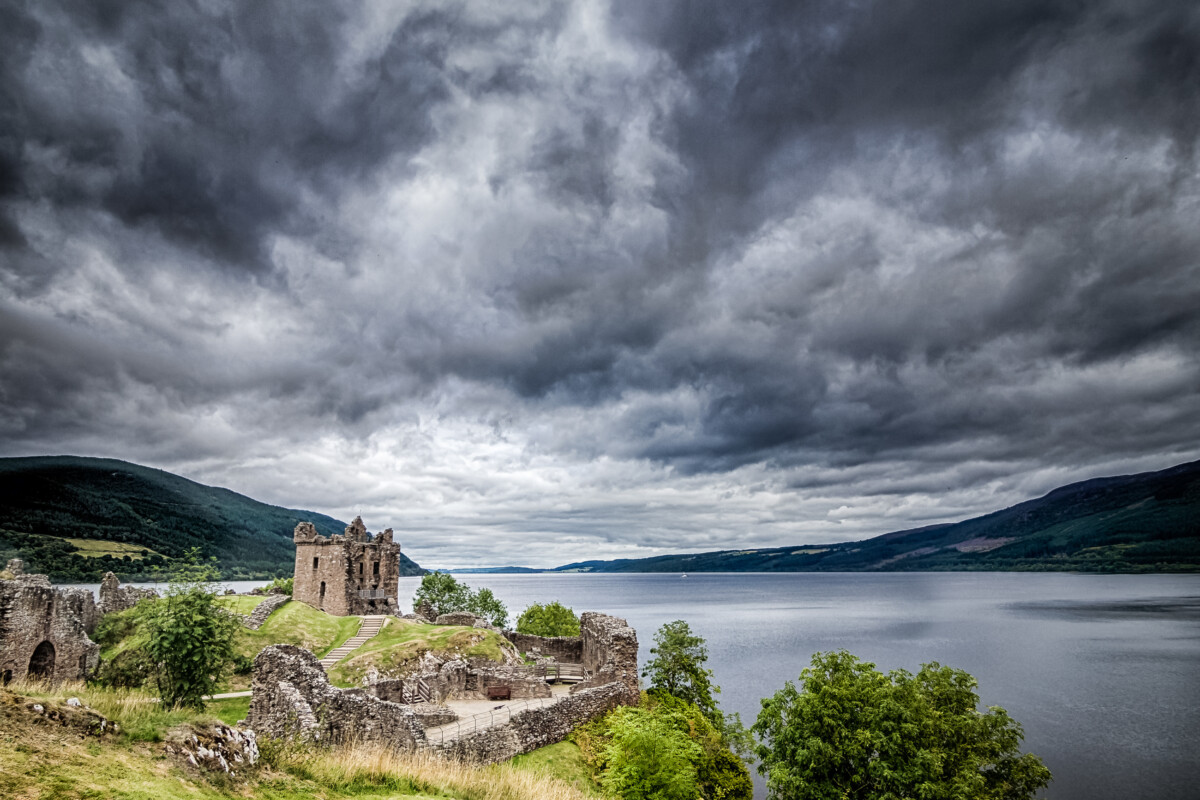 Loch Ness and Caledonian Canal  – Famous for its mythical monster “Nessie”, Loch Ness is part of a waterway connecting the east and west coasts of Scotland. The area with the canal and three other lochs is surrounded by the beautiful Highlands scenery, but there is nothing more scenic than Loch Ness itself, with the ancient ruins of Urquhart Castle on its hillside. One can easily drive here from Inverness. 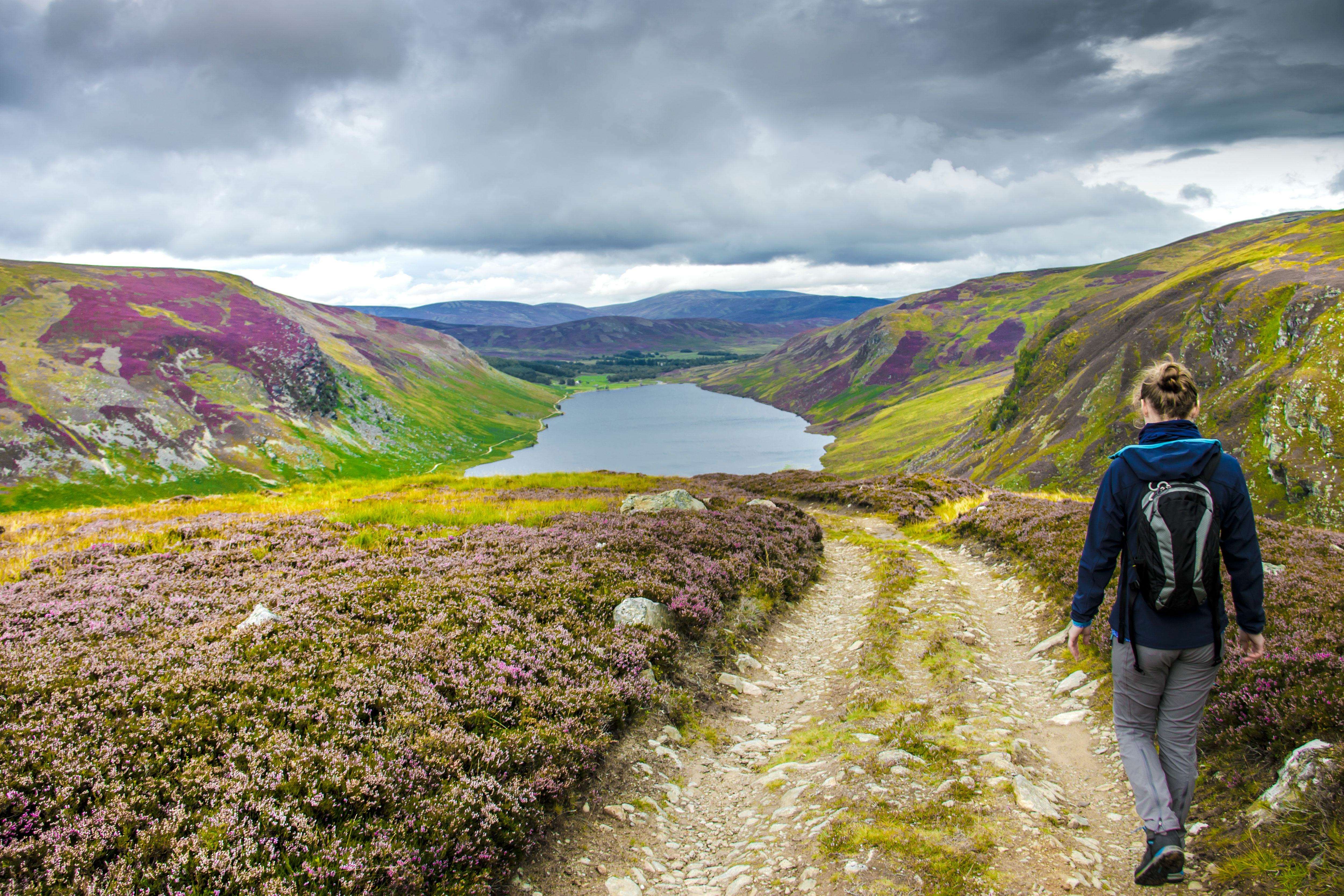 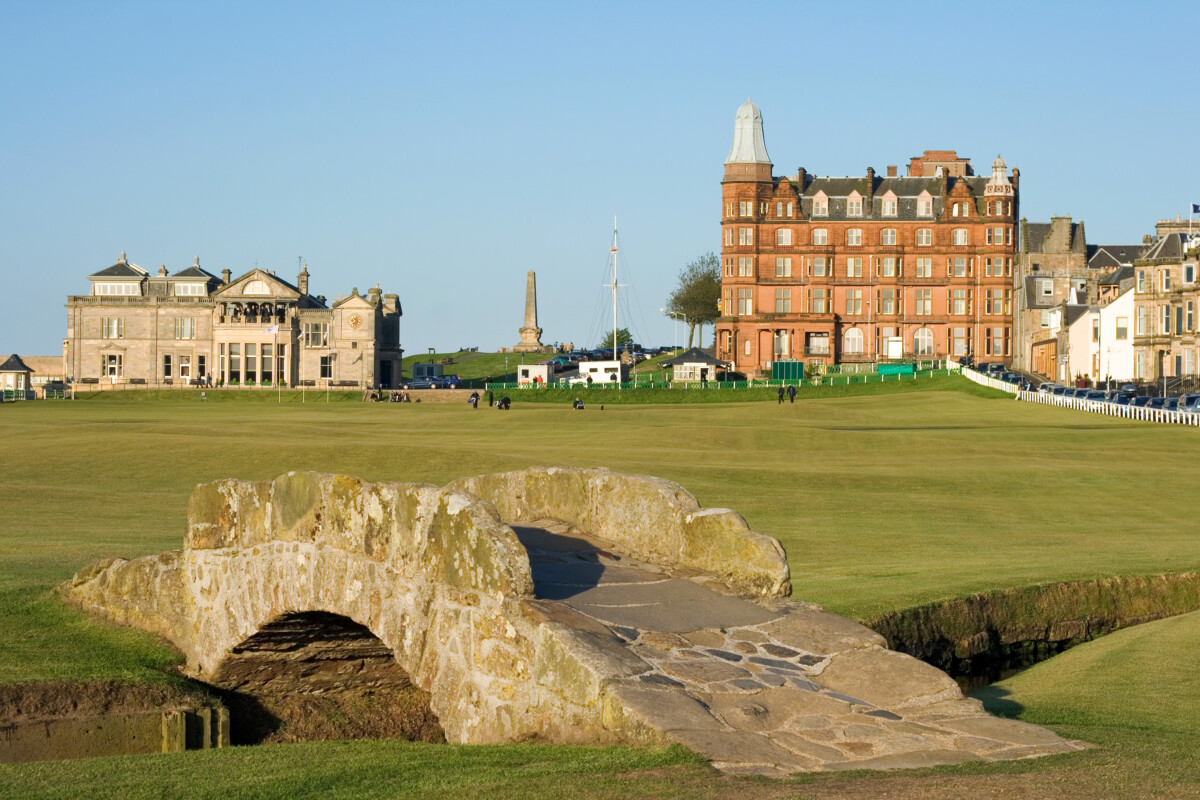 St. Andrews Golf Club  – As some may not know, the game of golf is an invention from Scotland. It is therefore not surprising that the country houses some iconic golf courses, such as the much revered Royal and Ancient Golf Club located in historic St. Andrews. This place was founded in 1750 already and still hosts regularly the famous British Open. You may be lucky and win one of the demanded tea times as some spaces are kept available by lottery two days in advance. Worth seeing are the majestic Clubhouse as well as the British Golf Museum.

The Northern Highlands – You can’t visit Scotland without having been to the Highlands. A mystic landscape with a long history, at once violent and romantic. Spread over this outstanding natural beauty are tiny little villages and towns, such as the pretty coastal village of Dornoch or John o’Groats where a world-famous sign proclaims the northernmost point of Britain. One can explore this northern tip of Scotland by following the scenic route of North Coast 500 (or NC500). 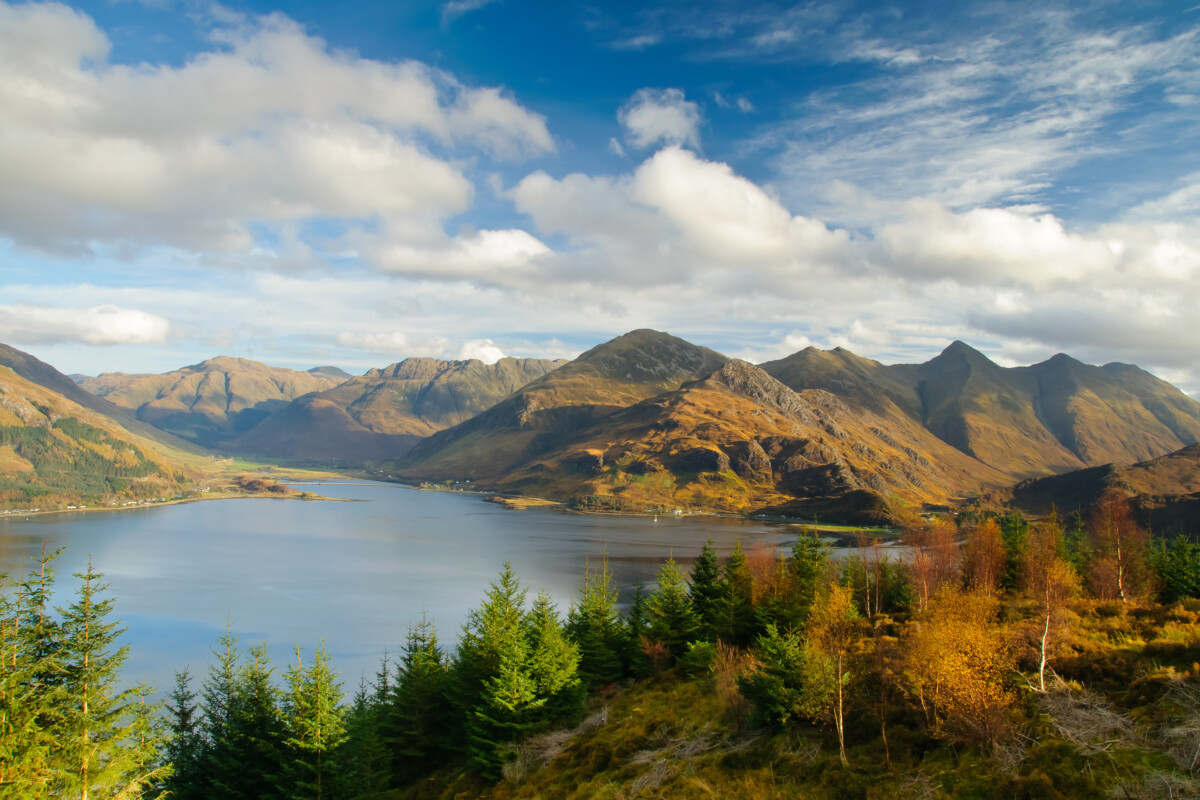 Loch Lomond & The Trossachs – The beautiful shores of Loch Lomond have become legend in Scotland. Britain’s largest lake, just a short drive northwest of Glasgow, enchants with myths, dreamlike landscape, and fabulous hiking trails. One will find here the Loch Lomond Shores, home to a shopping mall with local crafts, restaurants, bike and boat rentals, as well as a farmers market. It is also home to the Loch Lomond SEA LIFE Aquarium. 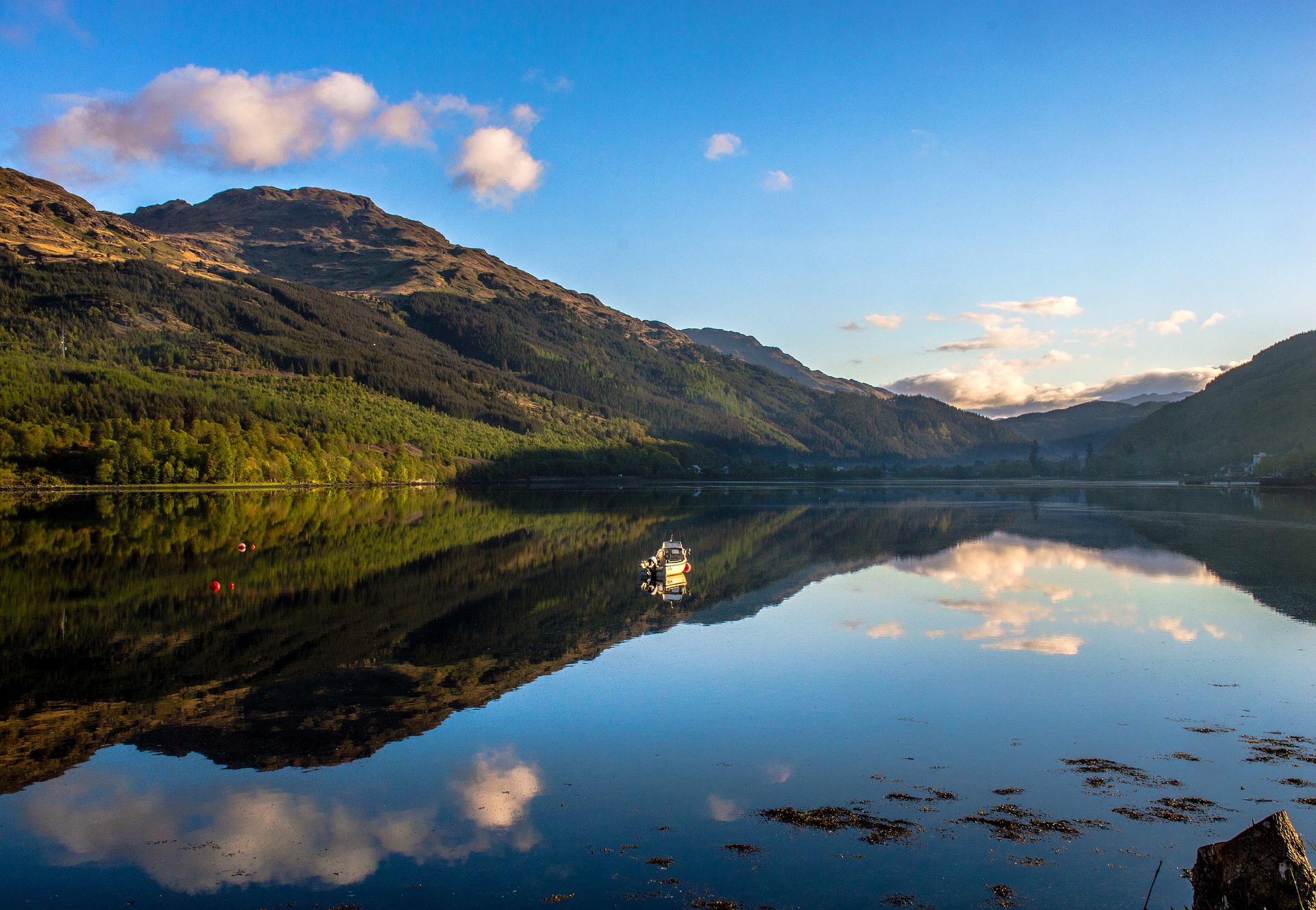 Isle of Skye and the Inner Hebrides – The largest of Scotland’s inner islands, the Isle of Skye, is a paradise for nature lovers and ramblers. Remarkable is the diversity of the landscape, that reaches from green valleys, sandy beaches, rushing waterfalls, caves, to lonely glens. But also the other islands are in no way inferior – Iona, for example, is considered Scotland’s “Cradle of Christianity” and houses Scotland’s oldest Christian cemetery, with graves of more than 60 Scottish kings, including Macbeth.

Glasgow – Scotland’s largest city impresses with many historical sites, green parks and spaces, a large number of Charles Rennie Mackintosh buildings, amazing street art, and a thriving live music scene. Next to the famous George Square and the city chambers, the Kelvingrove Art Gallery and Museum is particularly worth seeing. Opened in 1901 already, it is the UK’s most visited museum outside of London. The slogan, “People Make Glasgow”, really does fit the place, as Glasgow was rates as the friendliest city in 2014. 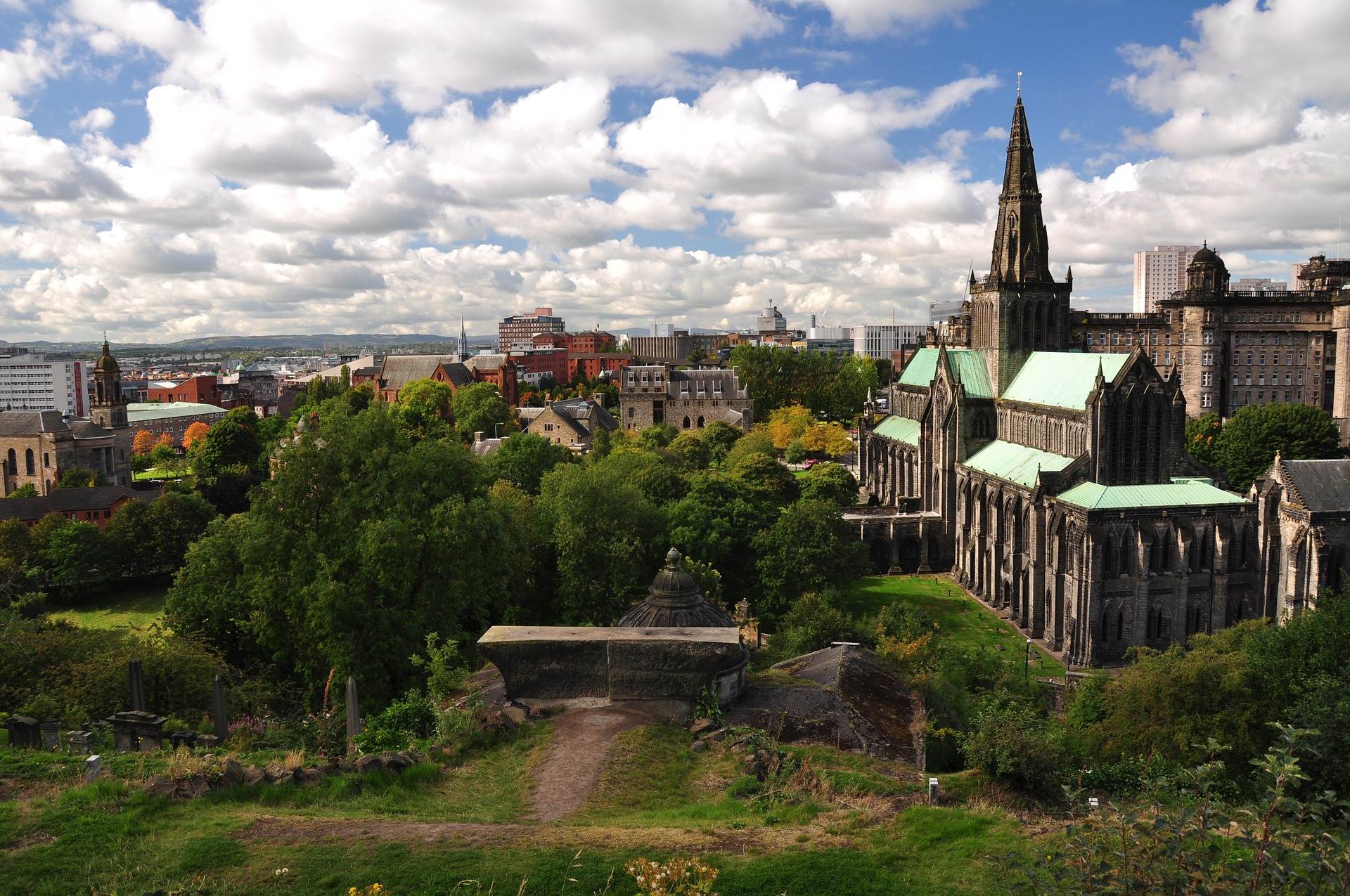 Fort William & Ben Nevis – Britain’s tallest mountain, Ben Nevis, is best to explore from the picturesque town of Fort William. It is well worth taking the 2.5 hours hike to the top where one can enjoy spectacular views over the Scottish Highlands and as far as Ireland. The coastal town of Fort William is also starting point of famous The Jacobite steam train which follows the West Highland Line over the spectacular Glenfinnan Viaduct and made itself a name by the Harry Potter movies.

Robbie Burns Heritage Trail – The country’s most famous son, the poet Robbie Burns, can be traced along the Burns Heritage Trail which crosses some of Scotland’s most beautiful parts. One can visit the Robert Burn Birthplace Museum in Alloway, where there is also the perfectly preserved thatched house in which he was born and spent much of his childhood. The tour heads south to Dumfries, home of the Robert Burns House where he spent the last four years of his life, and the St. Michael’s Churchyard with his final resting place. 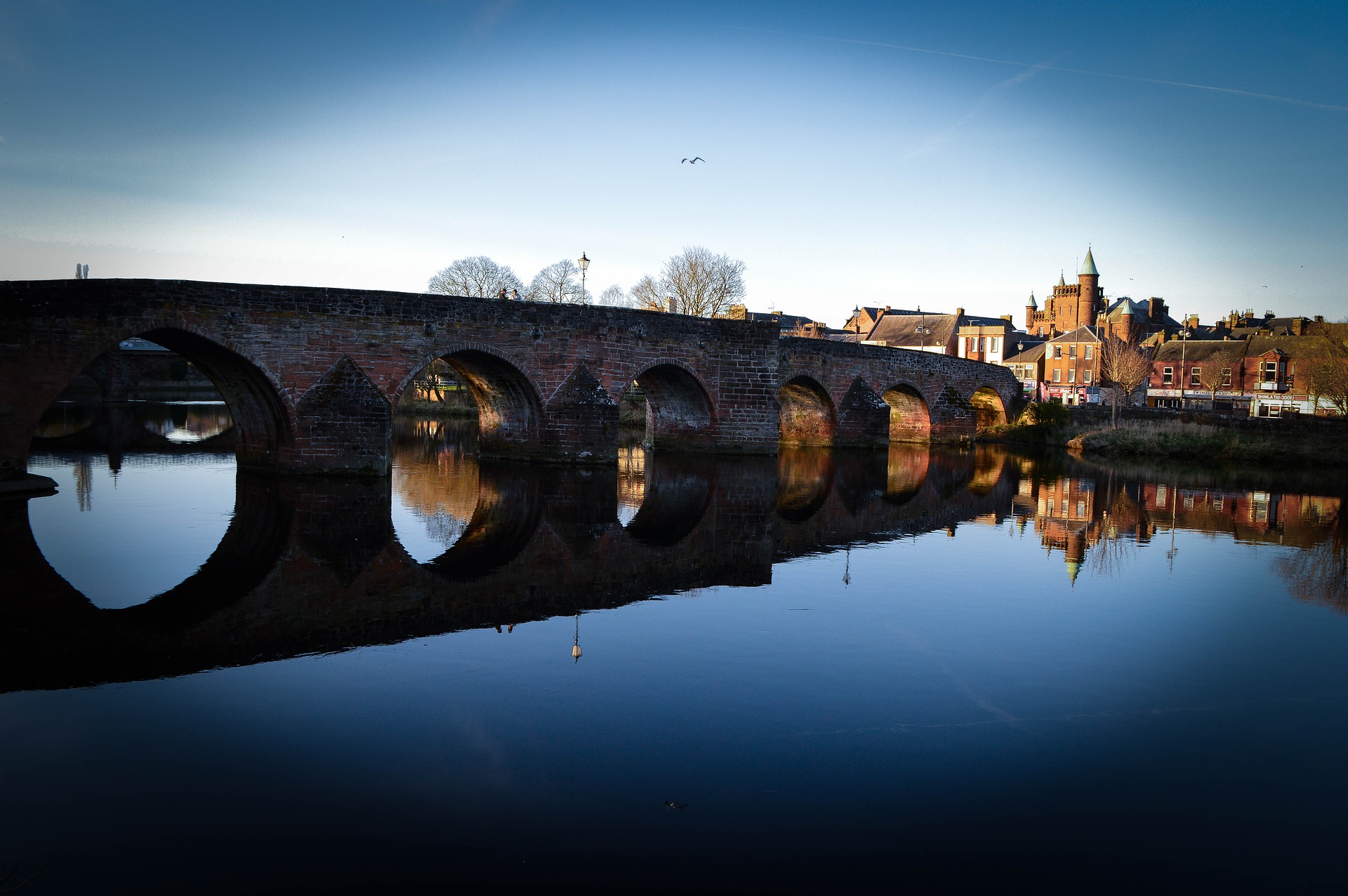